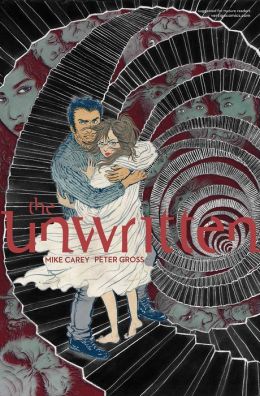 By Mike Carey and Peter Gross

Imagine living in a world where literature bleeds into reality, where fact and fiction have grown so similar that you can no longer even tell if you are real. This is Tom Taylor’s world. The son of a popular fantasy writer, Tom life has intersected with notable literary characters as Frankenstein, Moby Dick, and the work of Jud Suss.  The Unwritten continues to grow bigger in scope as more and more stories twist together in Tom Taylor’s world.

Volume 8 of The Unwritten, Orpheus in the Underworlds, covers issues #42-49 of the popular Vertigo series created by Mike Carey and Peter Gross. The charm of The Unwritten comes from the many literary cameos of characters woven into Tom’s life. Carey and Gross provide interesting perspectives on literary characters, such as Elizabeth Bennett of Pride and Prejudice and her change in attitude when facing destitution.

Tom’s main goal in this arc is to rescue his friend and lover, Lizzie Hexam, from the Underworld. With the help of some unlikely friends, Tom enters the Underworld and meets up with Leon and Cosi, two children who met an unfortunate end in volume 2 of the series (Inside Man). Their reappearance in this series reminds readers that people in Tom’s world tend to be hurt, both physically and emotionally. However, he doesn’t find just the two children in Hades. An important figure from Tom’s life is waiting in the Underworld.

One of the main features of The Unwritten is the mystery behind Tom’s existence. His life is growing more and more like the stories his father wrote. People who know Tom are convinced that he may be more fictional that real. It may be more complex than that. A prophesy-reciting unicorn sums up Tom quite nicely: “He weaves the knot that wove him. Finds the sky and earth exist reflected in his eye. He writes the words that he was written by.” There is an assumption that literature reflects life, and, in a way, life imitates literature as well. It is not as clear-cut as saying books were based on Tom’s life or Tom’s life inspired books. The Unwritten shows us just how tied people are to literature in a very overt style. In the words of Richard, a friend of Tom who is only alive because of a story, “Stories are where we live.” With the injury to the Leviathan, a way to connect to literature in The Unwritten, there is an uncertainty to the state of stories and their power over the real world.

The latest volume of The Unwritten is strong – it both continues Tom’s journey towards understanding his life while also setting up for a pretty awesome crossover with another Vertigo series. While it may be difficult to fully understand the scope of the story from one volume, new readers will at least enjoy the overall story presented in this collection. For both seasoned and new The Unwritten fans, Orpheus in the Underworld is a must-read.