Endings are hard. It’s impossible to please everyone, so you try to wrap things up as best you can, right?. Here’s the thing: I’m not quite sure if the end of FF is brilliant or just a blunt instrument. It’s been a long, strange trip for the Future Foundation, and for the most part, it’s been one hell of a good time. In issue #16, however, the story comes in for a bit of a rough landing. 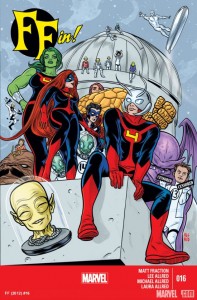 Most of the issue focuses on the beat-down delivered upon Doctor Doom by Ant-Man, Scott Lang. Scott spends almost all of that time talking–sometimes waxing philosophical, sometimes spouting exposition. This seems to serve a couple of purposes: first, it works to wrap up Scott’s grieving process–his daughter’s death having been the focus of his character in this series–and second, to grease the wheels for the near constant string of surprise developments that fill out the other pages. It’s not just that there is a lot of ground to cover, but there is so much information that I had to set the issue down a couple of times just to process it all.

The book seems packed to the gills with strange deus ex machinas, one right after the other. And this is where I really lost my way. I’ve been taught to shun the device as a cliche and the crutch of amateurs, but maybe when you’ve got a title as weird and wonderful as FF, maybe that’s how you finish. Maybe you change the nature of pym particles, maybe you bring in an older, other-dimensional version of a character, maybe you bring down an omnipotent cosmic entity to scold Victor Von Doom, and maybe you do it all just to teach one of Marvel’s oldest super villains a lesson. The whole thing plays out like a Kirby-flavored fever dream, and isn’t that what the series has been going for all along?

The backup story is an extra ten pages of the FF and Fantastic Four having a barbecue on the moon. All of the remaining threads of story are wrapped up, especially those little character bits that they just didn’t have room for in the body of the issue. What happens with Scott and Darla, how does Reed feel Scott did with the kids, does the Silver Surfer like hot dogs–you know, important stuff. Kidding aside, though, it’s a nice little piece to put a pin in the series in a satisfying way.

The art, as ever, is wonderful. I can’t say enough good things about Mike Allred, but I can certainly try. What I liked in issue #16 in particular was the layouts. Allred has a way of laying out a page that is simple, but also creative and fun to look at–like his art. It’s subtle, not flashy, and absolutely perfect. And I don’t know if it’s Allred’s inks in the backup or what, but I can never tell the difference between Joe Quinones’s art and Allred’s in FF. It just fits perfectly.

Buy it. This is the final chapter of Matt Fraction and Mike Allred’s FF, and, while issue #16 wasn’t perfect, the rest of the series is damn close. In order to complete this review, I had to go back and read all 16 issues, and I now feel like that’s the best way to experience FF. Take a weekend, grab your issues or your trades and dig in over coffee and donuts. Let it pitch woo at you. Let it impossible you. Most of all, let it make you smile.