I don’t know anyone who isn’t at least a little bit tired of zombie stories–movies, comics, tv shows, whatever–myself included. So, when I opened Night of the Living Deadpool and realized that it’s just a zombie story with Deadpool in it, I was a little disappointed. My job for the rest of this review, however, will be to convince you that even though zombie stories have been done to death (pun intended), Cullen Bunn’s new Deadpool miniseries is not only worth reading but might actually have a little something more to say on the subject. 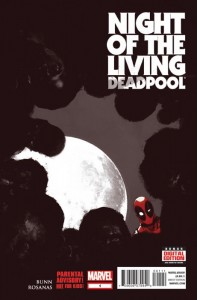 It’s a familiar story to fans of The Walking Dead and 28 Days Later: Deadpool wakes up a few days after the zombie apocalypse has wiped out most of the people on Earth to a city gutted and seemingly empty. Except in this story, The Merc with the Mouth has consumed an epic number of chimichangas at his favorite Mexican restaurant, passed out, and the goodly owners locked the sleeping ‘Pool inside before they fled the outbreak. DP then spends the rest of the book wandering around the city, piecing together what happened before being attacked by huge numbers of the risen dead, and eventually getting rescued by a group of survivors in an El Camino.

A couple of things set this book apart from other zombie stories I’ve read. First, the book uses color to wonderful effect. For most of the story, the only thing in color is Deadpool himself. The world, the zombies, and even the survivors are all in black and white. The only exception to this is a flashback in the middle of the book which is colored normally, showing the days leading up to the Merc’s chimi-binge and the warning signs he missed. Second, these zombies speak. In a Deadpool book, you would think this would be funny, but to quote the man himself, it’s “…just downright unsettling.” The zombies echo whatever was on their mind when they died, and do so until their brain fully dies. This includes anything from, “I think I left the oven on,” to, “I just want my life back.” This actually manages to temper the mood of this book from Deadpool’s usual silliness to something more somber and disturbing, and serves to be the most intriguing part of the story.

The art in this issue is great, including what I’ve already said about the colors. Ramon Rosanas creates a more realistic world than we’ve seen in the last couple of Deadpool minis, which works perfectly with this story. As I said, the nature of this version of the living dead gives the book a more serious edge, and the more detailed art helps drive that point home. While the fact that Deadpool himself is fully colored adds back a little of the humor to the story, it creates a separation between the character and the world around that may become an issue going forward.

Buy it. Cullen Bunn has done a fantastic job with all of the Deadpool minis, and this may be one of the best. Just when you thought it was safe to forget about the zombie genre, Bunn and Rosanas have given us just a little bit more to think about and enjoy. Issue two is supposed to land in just a couple of weeks, so we won’t have to wait long to find out what happens with our mouthy hero.