Multimedia tie-ins have an almost Herculean task set before them to breach my wallet.  After being burned for decades by video games based on hit movies, novel adaptations of game settings, and animated companion pieces for all of the above, I had long since passed the point of equating the words tie-in with anything less than garbage.  So, when I say that the Injustice: Gods Among Us comic tie-in from last year is an absolute blast from to beginning to end, I just want you to understand that it had to fight past a lot of pre-judgement to earn that praise.  But fight it did, and against all odds, created a quirky no-holds-barred setting of its own that won over readers with its eager energy, character driven storytelling, and unapologetic plot twists.  Now though, with the shocking discovery of its quality waning, the bar has been set higher; and with the release of the first chapter of Injustice: Year Two, can this surprise hit maintain the energy that caught us all unaware last year?  Oh ye of little faith, of course it can. 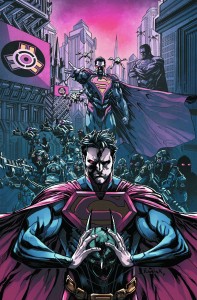 With the explosive conclusion of Year One behind them, the time has come for all parties to mourn the loss of a dear friend.  But grief is not the only emotion to loom over these tarnished heroes, as those left behind look to Superman to explain the actions that brought them to this low place.  Elsewhere, Batman struggles to recover both physically and emotionally from the latest encounter with his once best friend, as a blissfully ignorant Kyle Rayner returns home from deep space to find his home drastically changed.

In these first few chapters of Injustice: Year Two, Tom Taylor again shows why a book with such a staid and stale premise as ‘Superman goes evil’ can be exciting and fun; by keeping the focus on the characters themselves instead of the bombastic action.  Interspersed with the light humor of days gone by, the rough cuts into the sad present day feel even more tragic, with reminders fresh in our mind as to what exactly has been lost.  And its precisely that emotional resonance that sells the story to the reader.  Even if you do not care about the politics/story of these bigger-than-life situations, it is the drama of these people as they struggle to cope with each other that has kept me glued to the screen for each chapter.  Altogether, this first issue is a roller coaster of a ride that had me chuckle more than once, feel pity for those affected by these fictitious tragedies, and even wince as it reminds us that nobody is safe in the world of Injustice.

Never the strongest facet of the Injustice comics, the artwork has recently been taking a much needed turn for the better as the first season came to a close.  That improvement continues within Injustice: Year Two #1, and even appears to be finding a nice median between the digital/print formats.  Whereas the middle issues of the print version suffered slightly from the transition, I was able to compare both with this latest chapter once more (due to the print version being a chapter ahead of the Digital FIRST at this moment) and both look equally great.  With minimal action sequences, the weight fell fully on Redondo to match the tone and emotion of these scenes, and he was able to deliver.

Buy.  I continue to be amazed that a tie-in, let alone a tie-in to a punch-em-up fighting game, can actually be this entertaining for all the right reasons.  On paper, it has so many checkmarks against it and seems almost destined to fail, but somehow each chapter continues to keep me engaged and anxious for the next issue.