With the first arc coming to a close in this issue of Unity, Matt Kindt reaffirms what is so common and refreshing with books in the Valiant Universe; status quo’s can and will change when opportunities are presented. There have been several shifts throughout the Valiantverse in the past year and half, and this was just another in a string that had me thinking bring it on. 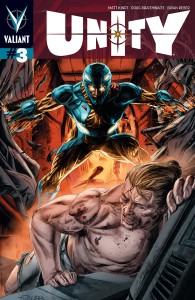 With the showdown between the Unity team and Aric coming to end, we are presented with a world changed by events nearly leading to a catastrophic world war. We aren’t privy to what happens with Aric and his people following these events, and I am glad Kindt left that to be explored by Venditti over in X-O Manowar. Instead Kindt presents the entire story through Livewire and the bond she experienced while wearing the X-O armor.

Livewire is probably the character we know the least about on the team. Telling the story through her view point of the world both prior to these events and after lends itself to the types of sympathetic storytelling that are so effective in creating the character-reader bond. She is the fulcrum of the new shift in status quo, and if told through any other character we would lose so much in terms of backstory and understanding not just her history and motivation, but that of Aric’s as well.

There is a double page spread from Braithwaite and Reber that really steals the show.  You can ignore the words on the page and you wouldn’t miss a beat. It’s a stunning tapestry of emotion. I sing his praise every other review, but Reber is one of my favorite colorists working right now. It is very fitting that we get such awesome color work in an issue where the true colors of characters shines through.

Buy It. The art alone is worth the price of admission. Adding a writer like Matt Kindt to the mix makes this series feel like a steal. The first arc of Unity has been one of the best Valiant has put out. A round of applause for Kindt, Braithwaite, Reber, and editorial for letting their writers shake things up every few months. It just keeps getting better and better.