Sometimes–not often, but sometimes–getting my reviews in late pays off. It just so happens that today we found out the fate of the Ultimate universe post-Cataclysm, and I have to say that I’m seriously excited. Cataclysm: Ultimate Comics Spider-Man #3 was a perfect end to this arc, and it begins to plant the seeds for All-New Ultimates and Miles Morales: Ultimate Spider-Man coming in April 2014. It’s nice to know that we have something to look forward to in the Ultimate Universe after Cataclysm, even though we’ve still got two issues of the event book to go. 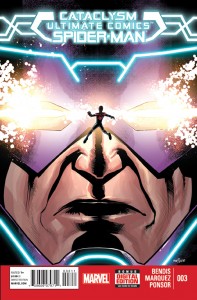 Issue #3 picks up right where #2 left off–with Miles making an epic confession. Unfortunately, it doesn’t really go very well. And that’s before the passenger plane crashes in Miles’s neighborhood, swatted out of the sky by Galactus. As Miles and Spider-Woman rush to save the passengers on the plane, they are joined by more and more of their new friends: first Cloak and Dagger, then Bombshell. Even the infamous J. Jonah Jameson makes an appearance. Finally, as the issue comes to a close, Miles finds out from Captain America that they have a plan to destroy the planet-eater, and the key is Miles himself.

Bendis does a great job here keeping everything that makes Ultimate Spider-Man great while still tending to the business of the Cataclysm event. The emotional beats in this issue are as good as anything in the series, and while the first few pages are heart-breaking, seeing Cloak and Dagger show up later is wonderfully exultant.

David Marquez does another wonderful job on art, and while the final page of the book has been making the rounds on the internet for over a week now, it’s still an amazing thing to see. I’m so happy that Marquez will be continuing with Bendis on the on-going adventures of Miles Morales. It’s hard to imagine the character without his style.

Buy it. The story of Miles Morales would be missing some key scenes if you only read the main book and skip this three issue arc. And, even though this is part of the Cataclysm event, there is still plenty of great character and heart in these pages. Grab it now while we all look forward to a new Ultimate universe coming in April!