I’m not going to lie, I didn’t have the highest of hopes for this “mega-sized” issue marking the 75th anniversary of Detective Comics.  Between the hefty price tag and getting burned in the past by similar anthologies that promised dynamite stories from big-name creators that turned out to be sub-par, the cynical portion of my brain was having a delightful time.  But damned if that old curmudgeon didn’t quiet the hell down not long after I began reading this book.  Detective Comics #27 is the tribute that this cornerstone of the DC universe deserved, featuring quality work from a line-up of writers and artists who obviously made this into a labor of love. 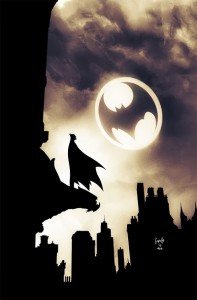 At its core, Detective Comics #27 is an exploration not only of the character of the Batman, but what it means to have a Batman in our society.  When you think about it, he is just as much a part of our world and collective thought than if he was actually out there protecting some foggy sprawling metropolis and making the news on a nightly basis.  In the same way that we do with all our other myths and legends, we took a figure that we felt a connection to and made it real.

The last page of Old School, the story penned by Greg Hurwitz and drawn by the legendary Neal Adams, has a beautiful moment where the Dark Knight wakes up in the middle of a comic store, surrounded by adoring fans of all ages.  “I see the Joker-wide grins.  Hear them clapping and shoving and pushing.  Need coming off them like heat and I wonder…do they have any idea what I’ve been through?”  He asks this question with a wink and a smile rather than with disdain, because he understands in that moment the reason not only for his pain but for his evolution over the years.

The character shoulders the weight of our fears and anxieties, fights off that grinning menace in the corners of our minds.  We put him through the wringer, destroying and reshaping him for the present day, so that he’ll be able to fill whatever need we have for him.  This fact is illustrated in the wonderful Scott Snyder/Sean Murphy entry Twenty-Seven where we see an unending lineage of Bat-heroes fighting crime throughout the generations in Gotham.  There’s always going to be an incarnation of the Batman in our media and in our stories, whether it’s now or in another 75 years.

Not all the tales in this anthology are heady explorations of the importance of the Batman – some are simply fun romps that celebrate how freaking awesome he is.  Peter J. Tomasi’s contribution, Better Days, is an entertaining and nostalgic story that takes place on an elderly Bruce Wayne’s 75th birthday, and showcases some beautiful Frank Quitely-esque art by Ian Bertram.  John Layman’s Gothtopia, which will continue in the pages of some upcoming Bat-books, is a super cool alternate-reality style tale that sees Batman questioning his sanity as the world around him begins to make less and less sense. Finally, the opening story by Brad Meltzer, which retells the very first Batman adventure, is a neat little time capsule that is really cool to read alongside the original.

Buy It – If you’re a Batman fan and you have the cash to spare, Detective Comics #27 should be in your hands right now.  It’s a fantastic tribute to the Dark Knight and to one of DC’s best-known titles, presenting stories that will entertain and make you think about what Bats mean to you long after you’ve finished it.