Things certainly can change quickly and drastically in the comic book world.  If someone had said back during the Andy Diggle/Action Comics controversy (or even so far back as Grant Morrison’s hit-and-miss run) that the title would not only recover but make a complete 180 into one of the best books being published by DC, we all would have had quite the hearty laugh.  But who’s laughing know!?  Well, incidentally it’s still us, because Greg Pak and Aaron Kuder have managed to drag this book out of the depths and made it into something you can’t help but giggle delightedly over while flipping through its pages.  Simply put, Action Comics is a joy to read right now; it’s got more heart, fun, and excitement than you can wave a rock of kryptonite at. 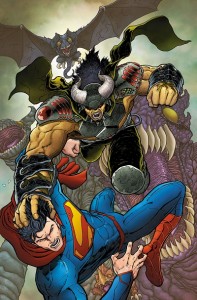 Issue #27 sees Clark trying to figure out what his new friend (the giant electro-monster turned tiny and insanely adorable electro-cutie-pie) is and where he came from.  Before he is able to find an answer, though, Superman must quickly join Lana back in the pit where the beast was discovered as more gigantic monsters begin to emerge.  With bug-eyed threats coming at them from all sides, the two old friends soon discover that there’s more to the place than meets the eye.

Part of what makes this title so wonderful to read now is the way that Superman is portrayed.  Many of the problems with the writing of the Man of Steel after the universe-wide relaunch involved the rigid new guidelines which the character had to follow.  He had to be younger, edgier, and different from the hero we had all known for so many years.  Now, different isn’t exactly a bad thing; it’s not the end of the world when creators try to breathe some new life into a stale character.  But it’s also an incredibly precarious tightrope to walk, one that Pak and company appear to have found a balanced footing on.

Clark feels like a young guy who doesn’t have all the answers but is doing his best to be the hero his adopted planet deserves, giving him a fresh new feel while also retaining the qualities that made him legendary in the past.  In Action Comics #27, we get to see more of his soft spot for the misfits and outcasts of this world as he tries to understand his new electro-monster pal (seriously, can’t get over how cute he is) and continues along this arc’s theme of exploring those who are alienated by society’s fear of them.  It’s in these quiet moments that Pak’s writing and artist Aaron Kuder’s work gel together best, highlighting the complex nature of this problem in a way that is shades of grey rather than just black and white.  This creative team is turning out to be a dynamite one-two punch, one that we should all be very excited to see more from.

Buy It – Greg Pak and Aaron Kuder have put out another high quality issue of Action Comics, filled with the action, laughs, and feels that have characterized the run since it began and that will continue to attract new readers.  It’s a good time to be a Superman fan, folks.