I read most of my comics monthly; I’ve never had the patience to “wait for the trade.” So for my year-end list, I want to focus on the power of storytelling and the single issue. These are the stories that stuck with me and kept me anticipating the next month’s tale.

I may be in the minority here, but the classic version of Green Arrow never worked for me. From his trademark facial hair to the boxing glove arrows, his whole image felt like the superhero equivalent of tacky Christmas decorations. Then came Jeff Lemire and Andrea Sorrentino’s “soft reboot” of Green Arrow. Sorrentino gave the Emerald Archer a modern look and the book a really specific style with experimental layouts. Lemire rehabbed Oliver Queen’s millionaire playboy image and anchored him with a solid supporting cast in Shado and Diggle. Now readers have a series that stands out in the New 52, thanks to extensive world building and a warrior mythology.

It all starts in Green Arrow #17, where Lemire literally destroys Ollie’s world piece by piece. Lemire reveals the flaws in Oliver’s overconfidence and uses the plot to revamp his personality in an organic way. The pace doesn’t let up, from a suspicious death to an archer duel. It proves that the right creative team can convince me to like almost any character. 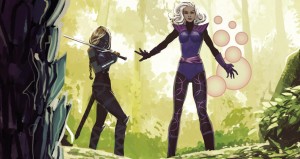 Fearless Defenders was a series that dropped off my pull list a few times in 2013. Despite some fun characters and snappy dialogue, the art strayed too far into cheesecake territory for me to read consistently. Then I picked up this issue penciled by Stephanie Hans and immediately started drooling. Suddenly even Valkyrie’s weird breast plates managed to look more stylish.

This book is not just about pretty art though. Cullen Bunn writes himself out of a tight spot and flips the team dynamic on its head. Tumblr practically blew up after Bunn killed off Annabelle Riggs (my favorite!) the previous issue. There was a lot of talk of Women in Refrigerators and it didn’t help that Riggs was one of the few gay characters in comics. After reading this issue, I feel justified in putting down my pitchfork and embracing the Defenders again. My favorite scene is of Annabelle Riggs not quite fitting in with the Norse crowd in Valhalla. Plus, there’s some great character moments for Valkyrie and Annabelle that highlight the strengths of the title. 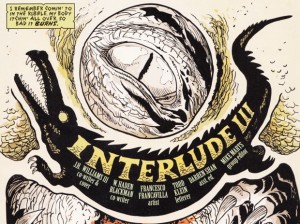 I’m sure I should have liked a Villain’s Month title better. But Batwoman #21 trumped DC Comics’ September lineup thanks to a compelling take on Waylon Jones.

Villains who are more muscle than smarts tend to get lost in the shuffle. J.H. Williams and Haden Blackman tackle a character that feels more like a place holder in most of his appearances and make him memorable. Killer Croc’s narration is extremely effective and reveals a self-deprecating awareness of his limited intelligence and flaws as a villain.

Francesco Francavilla fully captures the mood of this issue with his gritty pencils and adds a dash of humanity to Killer Croc. For long-term readers, Williams and Blackman nod to Batwoman’s history with the Religion of Crime and Claire from Greg Rucka’s Elegy run. There’s also some great bits with Maggie whipping out a shotgun and fighting alongside Batwoman. What’s not to like? 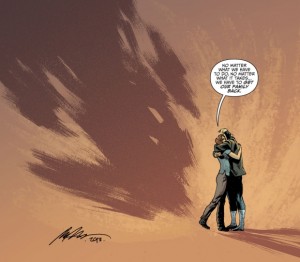 The Baker family have been through some dark times lately. Despite being eclipsed by the death of Damian Wayne in Batman Incorporated, Cliff Baker’s sacrifice and death was no less tragic at the end of Rotworld. His death echoed throughout the plot of later issues and was the impetus for Buddy and Ellen Baker’s (temporary) split.

As the only married couple left in the New 52, Buddy and Ellen’s tender reunion in Animal Man #24 is as touching as it is important. In the second Jeff Lemire book gracing this list, he shows how interesting and complex a married couple can be in a mainly young and single lineup at DC Comics. Ellen Baker’s empowerment in this issue is really satisfying as well. Rafael Albuquerque is a welcome addition to the title with his Gothic sensibility.

“We were the best, Richard. No matter what anyone thinks.”

Grant Morrison’s work can be as esoteric as it can be brilliant. Thankfully, he capped off his massive run on Batman with a simple metaphor about divorce.

What can be more devastating than a young boy screaming for his parents to stop fighting? This issue hinges on the readers’ ability to relate to Damian getting caught in the crossfire of his parents’ conflict. Damian Wayne battles against a horde of Leviathin soldiers to die at the hands of his own clone, The Heretic. There’s also a brief but memorable exchange between Damian and Dick that references Morrison’s run on Batman and Robin. Bruce Wayne’s greatest failure is Damian’s death, which adds an extra layer of despair to his caped persona. 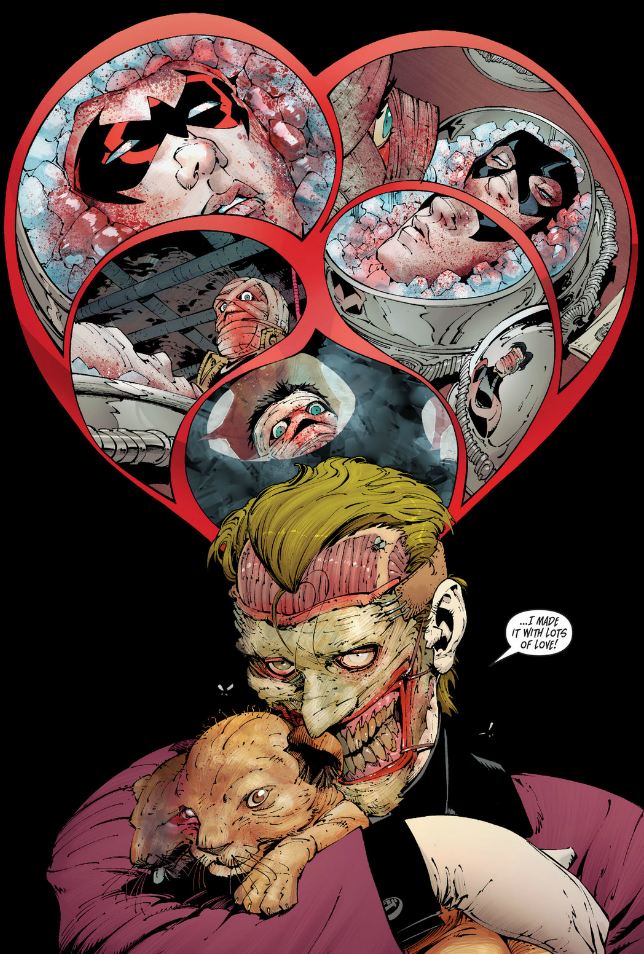 My choice for this category may be a little macabre. But Scott Snyder’s conclusion to his Death of the Family arc is essentially a twisted love letter penned by the Joker. Taken out of context, a lot of the Joker’s dialogue is eerily romantic. The Joker wants to prove that he is more “worthy” to be by Batman’s side than his family. After the dust settles and Joker disappears, Bruce Wayne admits that his connection and understanding of the Joker is deeper than he can explain. Forget Batman and Robin, I’d like to see more Batman and Joker.

Man, Snyder could teach a master class on writing horror in comics. And Greg Capullo gives me chills with a Joker more in the vein of Silence of the Lambs than previous incarnations. Hopefully readers will see the rift between Batman and his family continue into the new year.

“Come with me if you want to be awesome.”

It’s hard to pick a favorite issue of Kieron Gillen and Jamie McKelvie’s Young Avengers. I’m in denial that their run on the title ends this week. Where else am I going to read quirky references to 1960s a capella groups and breakfast meats in the same book? DC Comics should take note: this is what Teen Titans could be with the right creative team.

Hawkeye and Marvel Boy come to the rescue of Billy and Teddy. Noh-Varr shows off a bit because he’s a sexy Kree badass. There’s an amazing two-page spread of Marvel Boy beating up the bad guys that even includes a legend. McKelvie’s distinctive style gives this book an edge beyond other books being churned out by the Big Two. Then there’s Kid Loki being Kid Loki. His treachery is one of the gems of this title–he’s either directly playing you or planting seeds for the long con. 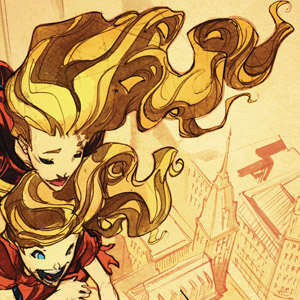 I took a month to read the last issue of Kelly Sue DeConnick’s Captain Marvel. Four months was too long to wait between the end of this series and the rebooted Marvel NOW! launch. This book hit so many emotional beats for me as a reader. The opening arc tackled embracing history and the difficult choices that shape a hero. If you could go back and choose differently in life, would you do it? Then The Enemy Within showed readers a superhero willing to sacrifice everything–even her identity–for the greater good.

Captain Marvel #17 is essentially a victory lap for the title. Carol Danvers reconnects with her supporting cast and (re)learns about herself through Kit, her young neighbor. This series is unique because it has fully-realized female characters across the age spectrum. The cover image is a tribute to the Carol Corps, the online community that formed around the character. 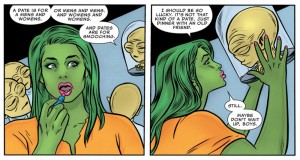 FF was one of those series that flew mostly under the radar. I would argue it was the better half of Matt Fraction’s work on Fantastic Four. In a relatively short run, Fraction endeared me to characters I had never heard of two years ago. Medusa. She-Hulk. Ms. Thing. The book balanced a playful tone with heavy themes like mourning the loss of a child.

What makes FF #4 stand out is its whimsical quality. The Moloids have a crush on She-Hulk–or “The Jen” as they call her. Their dialogue with Jennifer Walters is delightfully absurd. The Moloids enlist Bentley-23 to ruin her date with old flame, Wyatt Wingfoot. Each of their efforts puts Jen closer to Wyatt in a variety of over-the-top scenarios. Michael Allred’s pencils showcase both She-Hulk’s strength and femininity–something many artists have failed to do effectively. FF, you will be missed. 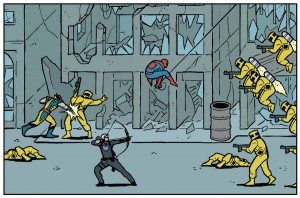 Clint Barton does important work. Things like fixing his DVR, chatting with neighbors and getting beaten up in a Santa hat. This issue sums up everything I love about Hawkeye as a series. There’s Grills and the Tracksuit Mafia. Kate Bishop makes a brief appearance to snark at Clint about his poor decisions. The partnership between Hawkeye and Hawkeye makes this book unique. There’s no formulaic sexual tension followed by hooking up later in the series. This is a book about two Hawkeyes, not a superhero dude and his love interest. David Aja captures all of the small details from Clint’s body language to Tony Stark’s smirk. Matt Fraction shows how good a series can be with quieter moments in the life of a superhero.