I know what a lot of you are probably thinking, “Another Avengers series. Joy…” It’s a thought that many people share, because there are a lot of on-going series with “Avengers” in the title. I counted seven, but I probably missed one or two. For hyperbole’s sake, let’s just say there are like a gajillion Avengers titles out, so why should we care about one more? 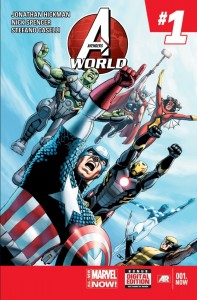 Avengers World is spinning out of the main Avengers title and continuing with one of the plot lines we haven’t seen much of since before the “Infinity” event. The scope of the story that Hickman has been telling has been getting larger and larger, and that was starting to get me a little concerned. With a separate title to tackle the more Earthly-based foes, we don’t have to worry about bouncing around to several different simultaneous arcs within one on-going series. Nick Spencer, who helped out with this story line in Avengers, is also on board as writer for the series.

Avengers has gone back to monthly releases, so if you were already picking it up you aren’t going to be spending any more money by buying both titles. I like what Marvel has done here, because it gives the reader the option of opting out of a story line they may not care for, and it helps untangle some of the various plot lines.

As a number one issue, Avengers World works. New readers are introduced to the new conflicts erupting around the world, which lends itself nicely to the title of the series. For those readers jumping over from Avengers it’s nice to see what A.I.M. has been up to while the rest of the world fell into Chaos.

As I said, I’m jumping over from Avengers. The transition and progression of the story feels natural and is told in much of the same style of the previous Hickman/Spencer issues. I actually prefer some of the issues with Spencer helping on writing, as the they tend to have more dialog that is lighter in tone when compared to the often-ominous narration boxes in the solo Hickman issues. It’s welcoming, and does more to pull you in and put you on the ground with the characters.

The art is one part of the issue that I found myself having conflicted thoughts. The style is consistent throughout the issue, but I found my enjoyment of it to not be. I found Caselli’s style to really work in some areas, but in others I just wasn’t digging on it. I thought the one page spread with Thor, Hyperion, and Captain Marvel was amazing, as well as the scenes in Madripoor. However, I was bothered by his depiction of Bruce Banner. It looked too Peter-Parker-ish. A lot of the characters had hair that looked like they just ran some gel through their hair and did a quick shake of the hand to get that slightly messy look to it. I’m quibbling over small stuff, I know, and honestly, I am still going to be picking up the series, but can we get some of these heroes a comb or a brush?

Buy. Yes, it is another Avengers title, but Avengers World is spinning the story out of the already heavy Avengers series. It feels lighter in tone than its older sibling, which is a welcomed reprieve for many. If you weren’t interested with the stuff going on with A.I.M. pre-Infinity, then you might want to skip this.

New readers, pick up Avengers World if you are interested in the battles on Earth, and Avengers if you want the more galactic/trans-dimensional foes.