There are a lot of layers to The True Lives of the Fabulous Killjoys (referred to as Killjoys from now on.) It begins slowly, keeps its heart in places you wouldn’t expect, and ends too quickly. It presents a reader with new ideas, well-worn tropes, and familiar genres. Issue #6 is the last of the series, the end of the road, and while it does pay off all of the ideas presented in the rest of the series, it moves too quickly and jumps around too much to really make the end as satisfying as I hoped it would be. 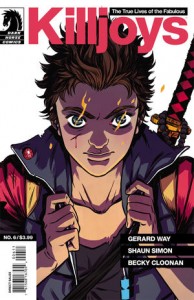 The trouble started in issue #5 when we finally learned the answer to the question of The Girl–how she is special and why. The explanation is more spiritual than I had expected, and her actual specialness more tangible. It’s the type of “power” that I would have expected to see sooner in the series, explained earlier, and the character given a more active role in her discovery. It makes me wonder if we are finally seeing Gerard Way’s inexperience manifest or if maybe the world he created is just too big to be boiled down to a six issue mini-series. I’m not sure if Way has more planned for the universe of the Killjoys, but it’s the kind of place that begs to be returned to. There are a thousand little stories to be told between Battery City and the Desert, and while this story may have been the biggest, I think the best is still to come.

Issue #6 of Killjoys pulls back a few curtains and lets you see the ideas behind them, but it feels like no sooner are they pulled as we are on to the next part of the story. One page we are storming Battery City with The Girl, the next we are getting reprogrammed with Korse, the next we are following Blue in the desert. And flip, and flip, and flip, and then it’s over. The individual stories finished, but the overall story–the “what-does-it-mean” of it all–is still lost on me. Maybe a few days and some rolling around in my head will work it out, but for now there is a world out there screaming for relief.

One thing I can say for limited series, I really appreciate the consistency in the art. Becky Cloonan’s art throughout the Killjoys has been wonderful–the apocalypse has never looked this good. From the wide-eyed punks of the desert to the gothic thought-policed streets of Battery City, Cloonan’s manga inspired panels pulse with life and energy. Dan Jackson’s colors are just as vibrant and add yet another layer of life to the Killjoy’s world. My only criticism is that there is some sameness in Cloonan’s faces that can make it hard to distinguish some of the characters, but no more than any other manga I’ve read. Make sure you read it straight through and you won’t have any problems.

Wait and see. If you are a fan of Gerard Way and his particular brand of fiction, there is plenty inKilljoys to love. If you are a fan of the post-apoc genre there is a lot here to see also. Just make sure you keep your eyes open and hold on tight or you might just miss something. This is a story that begs for the graphic novel format: the plot is nearly impossible to jump into in the middle, the extra content at the end of each issue is essential for understanding the whole world, and all-at-once is really the only way to go. Killjoys will stay with you, though, like a song stuck in your head, and despite my issues with this story, I’m looking forward to more from this world.