Here’s the thing: I really don’t like The DaVinci Code–the movie or the book. My extreme dislike has nothing to do with the premise, however. It’s all in the execution. Now, imagine that The DaVinci Code was a comic, that the main character was an actual detective, and that it had really awesome art, and you would have Revelations. Boom has done it again by bringing us another great, creator-owned comic series that I believe we will be giving out as holiday and birthday gifts by the end of 2014. 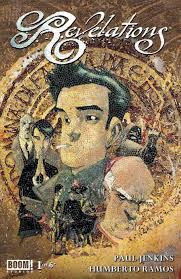 Revelations begins on a dark and stormy night in Vatican City. A cardinal falls to his death and a cloaked and hooded man babbles in Latin as he tries to stab the cardinal’s body. Cut to London, the apartment of Charlie Northern–detective, smoker, conspiracy lover. He’s about to get dragged to Rome to help solve the murder while another shady cardinal tries to cover it all up. It’s like Edgar Allen Poe slapped some sense into Dan Brown. Every page here is a joy to read, not just for the great characters and Northern’s polished snark, but for the anticipation that they build toward the budding mystery.Revelations is a six issue mini-series, and while I can guarantee that it will make for a beautiful collection, I don’t think I’m going to be able to wait until it’s over to read the whole story.

What I really want to talk about with this book, however, is the art. I’ve been a fan of Humberto Ramos since I first saw his Spider-Man, but what we get in Revelations is something else entirely. His exaggerated, cartoonish style wouldn’t seem appropriate for a story like this, but he makes it work and does so in spades. Ramos’s faces and features are distinctive and every character is utterly unique, every set piece from the rainy streets of Vatican City to the halls of the building itself are stunning, and the subtle expressions on each of the faces speaks volumes that the writing doesn’t need to. I would be remiss, however, if I didn’t also mention the suberb color work of Leonardo Olea and Edgar Delgado. A great deal of what makes the art so visually striking is the color, which has a sketched look–as though it were applied with colored pencil. This keeps the world of Revelations from being too vibrant while adding a wonderful texture to the panels and pages. This book is truly a feast for the eyes.

Buy it. If you like the Dan Brown stuff, even just for the ideas, you will love Revelations. I’m not sure yet how the balance of supernatural and secular will play into the story, but no matter how it goes, this will be a book that will be talked about in the coming year. Grab it now and watch as the story unfolds or wait for the trade and enjoy it all at once, but this is a comic that shouldn’t be missed.