To begin, a small confession: I’m not done reading Infinity yet. It’s in the stack, but I just got overwhelmed with everything else there was to read at the end of the year. That being said, a reader does not need Infinity to read Avengers #24. This really is one of those jumping-on points that we’re always talking about, and a pretty good introduction to Hickman’s Avengers. And while the book is good, it’s not great. 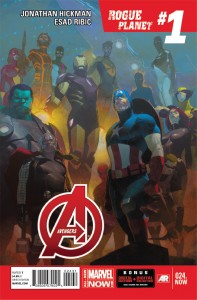 Listen, Jonathan Hickman is the cream of the crop when it comes to writers. Anything that I say about his writing has to come with the warning sticker that even with these little nit-picks, he’s still doing better than a lot of the rest of the comics business. However, there were a few things that bugged me while I was reading this issue, and it wouldn’t be right if I ignored them entirely.

First, not all of the characters in this issue seemed to have the right voice. The story is very self-contained, and the beginning shows the Avengers back at home, having a barbecue, and chilling out after the events of Infinity. All-in-all this scene is quite fun, and characters like Thor and Spider-Woman get their due. However, the adjoining scene between Tony Stark and Captain America felt like those characters had their dialog switched, with Cap as the pragmatist and Stark as the pessimist. Then, a future Iron Man appears at the party to tell the Avengers that they must avert a crisis, but avert it in a certain way so as to avoid the future that this Iron Man comes from. But wait, wasn’t the over use of time travel part of the reason for Infinity? And aren’t the X-Men going through this same thing right now? I had a hard time with this plot, and the fact that the solution didn’t really make a whole lot of sense to me didn’t help things. It doesn’t look like this story will continue into issue #25, and for a one-off it felt a little disappointing.

What was not lacking in this issue, however, was great art. Even though there are four artists listed in the book, I enjoyed the art throughout and didn’t find any of it distracting. Esad Ribic’s art is gorgeous, as always, and makes for a solid beginning of the book. Art transitions with scenes, and so doesn’t feel jarring when it changes. Colors seem married to locations as Earth, the rogue planet, and space all have specific pallettes. It’s a very striking issue in terms of art.

Wait and See. If you’re collecting Avengers, it won’t hurt to pick up this issue. It works okay as a one-shot. If you’re really wanting to get into Avengers, there are worse titles. However, I have to say that the book concerned me. I’ve been enjoying the entire run under Hickman thus far, but this was, for me, the first signs of slippage. I can only hope that next issue is stronger.