I want to say something ridiculously hyperbolic about The Illegitimates, like ‘This is the best thing to happen to super spies since Jason Bourne came to the movies.’ But that would be ridiculous, right? None the less, The Illegitimates has a really fun idea. Even if you’ve never seen a James Bond movie before, we all know the cliches–the hard drinking, the gadgets, and the casual sex. Well, The Illegitimates asks, “What happened to all of James Bond’s illegitimate children?” It was the 60’s (and 70’s, and 80’s) after all, and, as we hear from a character in the book, “[he] wasn’t big on protection.” 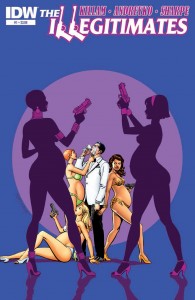 In The Illegitimates, the British government does not only know about the children of the world’s greatest spy, here named Jack Steele, they are secretly training them. After the super spy dies, leaving a super villain and a plot to foil, the Brits and the Americans decide to activate Steele’s indelicate bastards as they apparently don’t have any other assets anywhere near as good as the old man was. Much of the rest of the issue is spent introducing this motley crew of specialists with Daddy issues, and the actual assemblage of the team is left to the next issue. There is a serious Charlie’s Angels vibe going on in conjunction with all of the James Bond stuff, and it will be interesting to see how the team ends up coming together.

My only problem with the issue is that there really isn’t much here. You get the backstory of Steele, you get the premise with the governments, you get introduced to the team, and that’s it. There isn’t really enough here for me to say that it’s particularly well written. All I can comment on is the idea itself, which I throughly enjoy.

Kevin Sharpe’s pencils remind me of my 90’s roots. There is some young Capullo in his faces and figures. The action here is great even though each scene is only a few frames as the story jumps from place to place. The highlight of the issue is where each member of the new team is introduced and we get a full, poster-like page showing the character’s mother and then some bits of his/her life.

Buy it. So far, The Illegitimates is a really good idea that is decently executed. Time will tell how good the actual will become, but I for one was hooked at the premise. The real test of this title will be the character of Lordsley, who is working as an intern at the british govenrnment. She will end up being the leader and the brains of the team, and I feel like the book will hinge on her. Here’s looking forward to issue #2!