From official press release: “An attempt to clone Jesus eventually succeeds, but in the process creates scores of hideously deformed freaks and a monstrous twin brother, Damien. When the Vatican hears of Christ’s return and send in an extraction team, all Hell breaks loose…” Doesn’t that sound like fun? Oh, it is so much fun! The first issue of Escape From Jesus Island premiered on December 20 through Phantom Variant, the main launch to follow (available worldwide and digitally) on January 20. Now, on to the guts of this review. 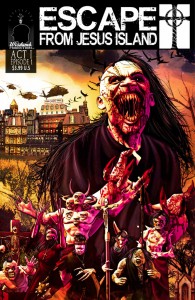 A group of animal rights activists break in to Regen Corp, a creepy castle like research facility, hoping to get some incriminating evidence and set some animals free. From the first step inside, it’s clear that there is more to this place than cosmetics testing. Bloody warnings scrawled on the walls, boarded up doors and gruesome signs of death are everywhere. Once the lab created freaks show up, the party doesn’t stop, if you consider bodies being torn to bits by razor teethed mutants a party.

As the last of the group run in fear, lost in the maze of the lab basement, they stumble in to the epicenter of the house of horrors. There, a bible quoting leader of the madmen (and women) declares them unfit to retain life. His loyal followers are anxious to shed blood in his name.

Escape From Jesus Island is a terrifying bloodbath that doesn’t slow down. From the moment the first deformed figure appears from the shadows, this story slashes at your face with morbid delight, leaving behind carnage which is eventually eaten like candy by a half man on a wheeled platform. The art work is definitely unique, often feeling like watching the characters of a film walking through landscapes of oil paintings. The art has two distinct styles playing on top of one another, which is admittedly off putting at first, but quickly seems just right for the subject matter. Escape From Jesus Island is obviously a project of passion: passion for darkness, blasphemy, terror and dismemberment. It is quite awesome.

Verdict: Pick up Escape From Jesus Island, as soon as you can get your hands on it. This series strives to be something much headier than most, unforgiving to the senses in a wonderful way. It pokes at uncomfortable places in the psyche, forcing you to imagine places that shouldn’t ever be visited.  I see nothing but intense, mind melting possibilities for Jesus Island, so I recommend you don’t miss it.