To be a comic fan is to have a strange kind of faith. From week to week, month to month, we try to have faith that our favorite comic hasn’t been cancelled, hasn’t changed creator, hasn’t suddenly changed to a different story arc, and so on. This faith is constantly tested, tried, and stretched to the breaking point, but we soldier on. Why? I believe that it’s because we trust in the comic’s creators. I believe that after 25 solid issues of Animal Man–plus everything else he’s written–that Jeff Lemire knows what he’s doing. I trust based on the evidence that I have in my back issue boxes, but I also take a leap of faith, hoping that next issue will be better. 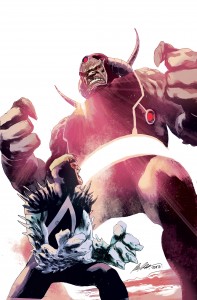 Issue #26 was something of a departure from the main story, and I still have no idea why it needed to happen. Buddy Baker suddenly finds himself on an alien world, fighting for his life. After several compatriots from different worlds–all seemingly in the same situation–die, Buddy makes one last, desperate act of survival. Suddenly, he is the last one standing, and we finally get some answers as to what is going on from an exposition machine called The Bridgewalker. The rest of the issue is spent learning who the Bridgewalker is, why he dragged Buddy out to space, and how it all connects to the Red and the Green. By the end of the issue, I started to understand how it ties into the rest of the story that is happening in Animal Man, but I couldn’t help thinking that there had to be a better way of doing it. But, I have faith in Mr. Lemire and his abilities. I can only hope that it all becomes evident soon.

And it will, for good or bad. Jeff Lemire announced last week that Animal Man is coming to a close with issue #29. According to his blog, he’s done telling the story he wants to tell with the Baker family, and he is writing Animal Man into the Justice League book that he is working on. Personally, I was very upset about the news when I heard it, but now that I’ve read this latest issue maybe he’s said all that needs to be said about Buddy and family.

The art in this issue is also a departure from what I’ve come to expect from Animal Man. That is not to say that Cully Hammer’s art is bad–quite the opposite. But, over the last 25 issues, Animal Man has established a kind of house style that even visiting artists have tried to emulate. Hammer’s art is cartoonish in comparison, though it has a very cool design element to it that makes it unique and suits the alien landscape.

Wait and see. I can’t recommend this issue, especially as any kind of standalone or starting point. It’s just too weird and too much of a mystery. I hope that, once the series comes to a close, I can look back on this issue and have it make perfect sense, but at this point it was such a detour that I can’t help but feel a little let down. As I’ve said, however, I believe in Jeff Lemire, and so I will keep the faith until next time.