As great as Saga has been since its return to the comic stands four months ago, its meticulous buildup towards the scene this arc opened with has been borderline excruciating.  That’s not necessarily a bad thing, mind you.  Brian K. Vaughan’s laser-like focus on pacing and character development is a trademark of his writing, and it’s what makes the eventual payoff we receive in his works feel so powerful and well-earned.  Saga #17 is the perfect example of this.  It’s everything we’ve been craving since August and represents what we’ve come to expect from this series and Vaughan’s work as a whole: solid storytelling with an emotional center that connects with you on a deeply personal level. 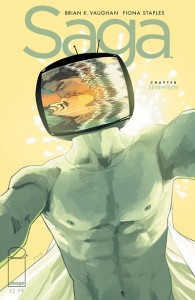 With the pot nearly at a full boil, we finally pick up where we left off at the end of issue # 13: Alana, Marko and their family in hiding as Prince Robot IV interrogates D. Oswald Heist.  While some have argued that the structure of this story arc has hindered the feel of it in terms of issue-to-issue reading, you have to admit that we would not be enjoying this level of tension if it was done otherwise.  As this scene unfolds, we also find Gwendolyn and Lying/Truth Cat racing to Heist’s lighthouse, and are given further developments in the story of the two investigative journalists, Doff and Upsher.

“It was an emotional rollercoaster ride,” ranks pretty high on my list of most hated clichés, but dammit-all if that saying doesn’t fittingly describe this issue.  And it’s not even a page-to-page thing; practically every freaking panel had me going from flabbergasted gasps to victorious fits of fist-pumping to Lion King level tear purges.  As a Saga reader, though, I have grown used to this phenomenon.  What really grabbed my attention in this book was the level of character insight we’re given.  The discussion between Prince Robot IV and Heist, for instance, added some much needed depth and complexity to the android, and managed to do so with remarkable speed considering how relatively short the two’s exchange was.

Perhaps the most disturbing development was the moment involving Marko and his thoughts on what to do with Hazel if their family was to be captured by the Prince.  It really is a strange side of the character, one that hasn’t been explored at all, and very much felt uncharacteristic in comparison to everything we’ve seen in him so far.  It will be interesting to see how this glimpse of Marko’s dark side will affect his relationship with Alana as the series continues.

Buy It – Welcome to Payoff City, folks.  Saga #17 offers some crazy plot turns, glimpses into the minds of some major characters, and setup for what will undoubtedly be a powerhouse climax to what has been a slow-burn of a story arc.  And, if you aren’t used to it yet as a Saga reader, get ready to be encased in a “glass house of emotion” filled with more feels than your tears can keep up with.