Giant serialized stories, filled to the brim with mythology, are notoriously hard to wrap up in any kind of satisfying way. There are usually too many plot threads, too many characters, and too high of expectations to ever land that kind of narrative ship without any bumps. But Locke and Key has never been a typical series, and so it should come as no surprise that Joe Hill and Gabrielle Rodriguez bring the book to a close flawlessly. 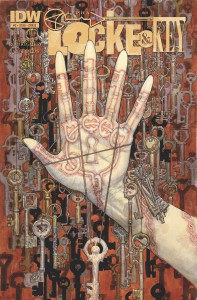 The fourth page of Locke and Key: Alpha #2 made me cry.  It was a small moment, not particularly dramatic or heavy, but an instance of levity in a otherwise horrible situation. And as I took in this one panel, this one little character beat,  something became crystal clear to me. These people, this Locke family, are as important to me as any characters I’ve ever experienced, in any medium, at any time.  If Alpha #2 contained only one moment like that it would be a worthy end to Joe Hill and Gabrielle Rodriguez’s  stunning series, but it doesn’t have one, it has half a dozen.

Locke and Key began in tragedy and has been about a family trying to regain their center just as much as its been about the mythology of the keys. So, Joe Hill was wise to stock the first issue of Alpha with all the plot it could handle. That issue took care of all the action and the exposition needed to end the series, which left this last installment without the weight of having to wrap up a story. Instead, it gets to be all about the characters. Alpha #2 gives each member of the Locke family gets their moment and that allows us as readers to have meaningful goodbyes with all of them.

Going hand in hand with Hill’s masterful writing is the art by co-creator (and co-storyteller I love that credit) Gabrielle Rodriguez. Hill may have molded these characters, but it’s Mr. Rodriguez who brings them to life. Alpha #2 not only pays itself off narratively, but visually as well. Rodriguez manages to say goodbye to the iconography, locations and ambience of Keyhouse just as effectively as Hill bodes a farewell to the Lockes themselves. Locke and Key has always relied heavily on the visual similarities of parents to their kin, the dissonance of the picturesque and the macabre and the stark contrast of the innocent to the evil.  It’s a complex visual language and one that, if misplayed, can cause a story to come crumbling down, but the visual cohesion through all 45 issues of the series is stunning.

Buy – This is a 100% recommendation as Locke and Key: Alpha #2  is as close to perfect as you can get for a final issue. Joe Hill and Gabrielle Rodriguez bring their series to an end with an emotionally charged and fully satisfying final look at the inhabitants of Keyhouse. This is a truly special story and one of my favorites of all time. Congratulations and thank you  to all those involved.