I may have said it before, but Cataclysm is a mess. I’m only reading two of the four titles in the event–the main story and Ulitmate Spider-Man–but between those two books the event feels a bad game of telephone. What makes it all the stranger is that Brian Michael Bendis is writing both series. Reading the two titles, however, is like reading a manuscript by Jekyll and Hyde. What I can say in the positive, however, is that Ultimate Spider-Man is the good side of this two-faced event. 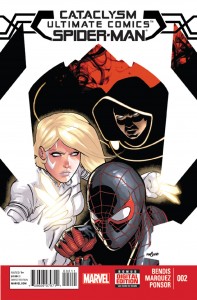 In fact, Ultimate Spider-Man feels like it hasn’t missed a beat from the last issue of the regular series. We’re still dealing with the fallout of the assault on Roxxon by Spider-Man, Spider-Woman, Cloak and Dagger, and Bombshell. We’re seeing how Cloak and Dagger are adjusting to super-powered life. We’re seeing Bombshell decide to become a superhero. Oh yeah, and there is a Galactus walking around. It feels like just another day in Ultimate New York except for the cosmic culinarian lumbering around.

I don’t know if Brian Michael Bendis is just so accustomed to writing Ultimate Spider-Man that it’s become so much second nature to him, but I feel like this title far superior to Cataclysm: The Ultimates Last Stand. The later is an exposition heavy mess of mediocre dialog and over-complicated plot points. Spider-Man, however, still delivers all of the emotion, action, and fun as it had before the event. It makes me wonder, yet again, whether this is the end for the Ultimate universe. Is this the end for Miles Morales? I certainly hope not.

Believe it or not, I didn’t make a mistake when I didn’t list an inker above. The issue doesn’t list one either. I’m not exactly sure what this means, but looking at Marquez’s pencils and how the colors integrate with his art, it’s almost believable that they’ve skipped the middle step. Marquez is more than a regular on this title–he feels like Miles’s second dad. At the same time, it’s hard to imagine this title without Ponsor’s excellent colors, including the ink-in-liquid look of Cloak and the looming, distant silhouette of Galactus in so many panels.

Buy it. Ultimate Spider-Man is still an excellent book, despite this distracting event thing going on. But, If you’re looking to find out what’s going on with that event, this is a great place to find out, and honestly, the only title in Cataclysm that I can recommend. Here’s hoping that we get more of Bendis, Miles, and Marquez in the future.