Drum Hellar, the psychic detective with the biggest eyebrows in comics, is searching for a runaway bog man that he’s named “Bogdan”. Last he saw Bogdan, it was upset and searching for something. A recurrent theme is already clear: questions. They build one on top of another, and if there’s any critique I can make, it’s that it’s not always clear what the question is Drum is trying to answer. As he says in this issue, “The mystery is the mystery of the mystery”. 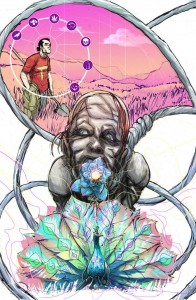 When the trail to Bogdan leads Drum and his floaty, pink squirrel partner to his bi-sexual ex-girlfriend, Bubbles, things get super weird very fast. Bogdan has brought along some friends to terrorize the innocent people who have no idea what’s happening when the supernatural creeps descend upon them. Bubbles takes a shot at dismantling Drum from the inside out, but only succeeds in helping Drum discover something of himself and figure out who Bogdan really is and what she’s searching for. One mystery solved, another lined up waiting, which involves mutilated livestock.

The best way I can explain this series is to say that it’s lots of fun, incredibly strange and quite nice to look at. Riley Rossmo is doing some of his best work and the story works perfectly with his style. It can be tricky sometimes to decipher if what Drum is seeing is reality or his reality, since he’s always working under the influence of psychedelics, but that minor challenge doesn’t take away from enjoying the story at all. The story of Drumhellar has endless roads to go down , each promising something uniquely queer to experience.

Buy this series, for sure. It’s nothing super deep or intellectually complex, but it’s hella fun and very pretty, with interesting characters and a story that has the potential to go on forever. I may have said this before, but it’s X-Files on acid. Thank you, Riley Rossmo, for another gem.