Pulp heroes seem to be making a serious comeback. The Shadow, Green Hornet, The Rocketeer, The Spirit,Miss Fury, and the whole cast of characters featured in this year’s Masks crossover event are a big chunk of Dynamite Entertainment’s comic offerings. The Shadow has almost as many titles as Spider-Man! Clark Savage, Jr. is one such pulp hero that Dynamite is bringing back to comics this week with Doc Savage #1. Unfortunately, like so many of his contemporaries, Doc Savage might not have what it takes to entertain a modern audience. 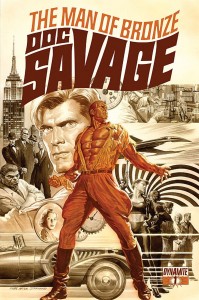 I debated with myself about how much research I was going to do for this review. I know very little about Savage and his band of merry men, and I eventually decided that was okay. I decided that I would try to come at it fresh and see if I could find that certain something that has made the character enduring. I have to say, I did not. Idea was interesting enough: Doc and his friends investigate a strange phenomenon that is causing regular folk to go berzerk in the middle of the city and for no apparent reason. And, it ends as quickly as it began. Using a mixture of pseudo-science and good, old fashioned elbow grease, the gang discover the culprit, foil the plot, and simultaneously stumble into something larger. It’s all pretty standard fare, and that would be okay if the whole book wasn’t just dull.

It seems childish to say that a piece of entertainment is boring, but that’s really the only way I can describe Doc Savage. The art is good, the story is decent, the premise is interesting and the characters are likable enough–if not a little flat–but altogether it doesn’t amount to much. I feel like I should know more about the character–why he’s called the Man of Bronze, for instance–but the information just isn’t here. There wasn’t even an intro into the book or a letter at the end.

As I said, the art is decent, but Evely doesn’t get much to do. This feels like the kind of story that should get a giant robot or a diabolical murder device or something a little more visually interesting than Doc Savage’s tin-foil hat. The character work is solid and it’s easy to keep all of Doc’s friends straight on the page, which is good, but there just isn’t enough here to stave off the boredom.

Skip it. These pulp properites seem very hit or miss in the last year. Mark Waid’s Green Hornet is a treat, and I’m looking forward to digging into Mark Wagner’s Shadow series, but Doc Savage just doesn’t make the ranks. Maybe if you’ve got a taste for that 1930’s storytelling that just needs to be satisfied, but apart from the hardcore fans, I can’t find much to get excited about in Doc Savage.