There’s a lot you may not know about Brain Boy. First, Brain Boy was not created by Fred Van Lente or Dark Horse Comics. He was created by Herb Castle and Gil Kane for a short lived series starting in 1960. Dark Horse approached Van Lente to resurrect the character after they published a hard cover archive edition of the old books in 2011. And here’s something else you might not know: Brain Boy is really cool. 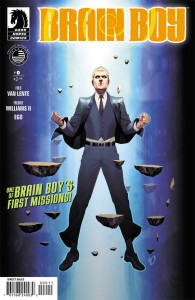 The original character–according to the Wikipedia article–got his telepathic powers from a high voltage shock when he was in utero. He was then recruited by a top secret government agency out of highschool to become something like James Bond: fighting communists and threats to the American way all over the globe. Van Lente’s Brain Boy is much more 2013. This Matthew Price was born with his powers, works for a private corporation, and seriously doesn’t like being called Brain Boy. His employers contract him out to the United States Secret Service (USSS) to protect President because he’s the most powerful telepath in the world, but he is not, by a long shot, the only telepath. Think Jason Bourne meets Push.

In issue #0, Brain Boy is on a very early assignment in his career, consulting with the USSS on the safety of a G8 convention in Ireland. Things go all sorts of wrong and Matt takes it upon himself to save the world from bad people. The premise seems like something you’ve seen before, and maybe you have, but that doesn’t stop the whole thing from being seriously cool. Brain Boy is the kind of fun you wish you could have watching spy movies. He’s a little bit James Bond, a little bit Batman, a little bit Jason Bourne, and a little bit Peter Parker all rolled into one. And, man, is it a good time.

The art in issue #0 is provided by Freddie Williams II. When Brain Boy was orignally announced earlier this year, it was supposed to be a four issue mini-series. Issue #0 is the fourth in that series–one, two, and three came out in September, October, and November, respectively. It was decided, however, before issue #1 even hit the stands, that Dark Horse would take the title monthly, and–according to his website–Freddie Williams II will be taking over art duties for the book from now on. While R.B. Silva did some phenomenal work on the title in issues #1-3, Williams’s art is also a superb fit for the book as he seems to have Matt’s theatricality and expressiveness well in hand. And, fortunately, it looks as though colorist Ego will be continuing on the book, and who manages to still enhance Williams’s sketchy, heavily lined style just as well as he did with Silva’s more minimal look.

Buy it. Issues #1-3 and #0 are all out on the comic shelves now and this is a seriously fun read. Spies, action, snark, telepathy, and well tailored suits are just the tip of the iceberg in Brain Boy. I suggest you get in now, because this could very well be a sleeper hit in 2014.