At this point in its run, I can’t help but seesaw back and forth in my opinions regarding DC’s “Forever Evil” event.  Part of me is tired of the heaviness of it all; the dark, stormy, and hopeless atmosphere that’s been running rampant through the universe has widdled my patience down to the size of a toothpick.  But then a book like Justice League #25 drops, and I find myself getting sucked back into its murky depths once more, thanks to its perfect blend of mustache-twirling bad-guy melodrama and perfectly paced plot progression. 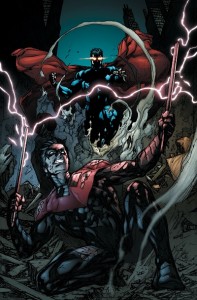 Justice League #25 provides an answer to one of the questions that has been up in the air since “Forever Evil” began: what does Owlman want with Dick Grayson?  To answer this we are finally given some insight as to this evil Batman-doppelganger’s origins, and as it was hinted at in Justice League #23. 4, it’s a story that’s seriously lacking in the “Sunshine and Rainbows” department.  Soon we realize that Owlman wants Dick by his side as his new partner, and he’s not going to take “no” for an asnwer.  Will Nightwing break under his oppressor’s heel and join this villain?  Or will he make a last ditch effort at escaping his captors?

In terms of narrative structure, Justice League #25 is very similar to the issue previous which featured the backstory of Ultraman, and it never really deviates from that pattern of flashback-present-flashback-present.  It’s a little predictable, by why deviate from a system that works?

Where the issue really shines, though, is the development of Thomas Wayne Jr.’s psychotic tendencies and his relationship with the Outsider.  These are some creepy-ass cats we’re dealing with here, and it’s in this issue that we really see how wonderful of a dark reflection they are to their good-guy counterparts.  And while on the topic of crazy, Doug Manhke’s art in this book is fantastic.  Just as he showed us in those early issues of “Blackest Night” where Blackhand slaughters his family, no one does mentally disturbed quite like Manhke.

Buy It – If you’ve been enjoying the events of “Forever Evil” then this book will be right up your alley.  Find yourself growing weary of it?  Well, Justice League #25, with its solid restructure of Owlman’s origin and continuation of the Dick Grayson storyline, might just suck you back in.