It’s no secret that I adore everything and anything produced by the mad, mad genius Menton3. His art, specifically, is always breathtaking in it’s utter depth and originality. The Memory Collectors is a series both written and drawn by Menton3, an exciting concept for a reader like myself who has been following his work for the last few years. 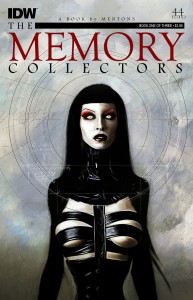 Beatrice, Edith and Magdalena are fetish models turned battle axes. Well, Edith and Magdalena are fetish models. They were chosen by Beatrice for their ability to ‘see’ demons in disguise and are trained to have the skills to kill them. The demons they hunt are ‘memory collectors’, thieves that hide in plain sight among the masses and feed on the life memories of mortals.

In issue #1 we meet the ladies and learn where they come from, at least emotionally. Beatrice trains them for battle and they seem to form an unbeatable team of super sexy killing machines. The story is narrated by Edith, who is haunted and driven by her own powerful memories of childhood abuse.  After killing a memory collector, they discover that he was sent as a message; something or someone much bigger is coming for them. Issue #2 introduces Glamour, a powerful memory collector who forces Beatrice to make the ultimate sacrifice to save Edith and ‘Mother’, their master. As Beatrice lays in a deep sleep, Edith watches over her and struggles to maintain the control she’s been trained to show. She’s torn over how her relationship with Beatrice will change. A new being called Lapis arrives with riddles and deals to make. Edith must make a difficult choice in order to save the people she considers her family.

The Memory Collectors is a tough one for me, as I feel so far it has such strength and potential but also some flaws I can’t ignore.  Menton3’s artwork is flawless and as impressive as ever. His incredible attention to detail makes each panel feel like a mural, like something you absolutely have to look over more than once to see all it contains. The warrior women are undeniably beautiful, powerful and sensual. Menton3’s art always exists in a dark, gothic space that invites a very different vision, one you won’t forget is uniquely his.

The story is creepy, sexy and weird. It’s definitely engrossing, at times, and offers fun action of the ass- kicking sort. It feels a tad indulgent to me, which isn’t necessarily a bad thing if the fetish fashion world holds charm for you. It’s obvious that Menton3 is allowing himself to have fun with this story, building a super hero tale in his own realm, which is a place of death demons, latex and layers of reality that overlap in battle. I know The Memory Collectors will appeal to many, even based solely on the fact that it’s so utterly uncommon. It will not appeal to everyone, however and my main qualm with this series at this point is I’m just not sure the story can reach  the ridiculously high bar set by the visuals. In other words, what I see is The Louvre, what I read is MOMA (Museum of Modern Art).

If you’re looking for something dark and spooky with sex appeal, this is definitely a buy. The Memory Collectors is absolutely quality comic book material but with such a strong style of characters and a story that demands much indulgence for Gothic kitsch, it will not be a buy for everyone.