Bluntly speaking, when Justice League 3000 was announced as the newest of the New 52 (and as a quasi-replacement for the then-cancelled Legion titles), my excitement was sincerely lacking.  Legion of Super-Heroes, with its particular tone and style, had kind of turned me off from the whole ‘diiiistant future’ of the DCU; and combining that with the worrisome naming precedent this title was setting (Justice League Old-Timey! Justice League Victorian! Justice League Next Week!) I may have had more than my fair share of reservations in my head.  But I am ALWAYS willing to try something new, and in this case, remind myself as to why I do give these titles the benefit of the doubt each week as I head into them blind. 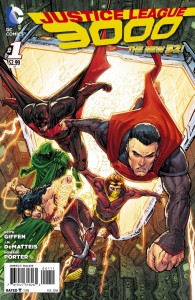 When the vibrant and peaceful 31’st century promised to them is shattered by tragedy, it falls upon the members of CADMUS to find a new set of heroes to get the galaxy back on course.  And who better to be the standard bearers for this brighter tomorrow, than the iconic heroes of yesterday.  So, with science and historical texts on their side, a new iteration of the Justice League is spawned.  But can science truly capture the essence of what makes an individual or a team?  And is the view of history from the 31’st century entirely accurate as to who these heroes were as people?  Short answers to both: Nope.

Just like our own history, the finer details of people and events are lost and muddled along the way, and both Giffen and DeMatteis are utilizing this common fact to perform an intriguing character study of the iconic Justice League by ommiting or exaggerating personality traits within their newer counterparts; just as these personalities may be misconstrued after hundreds of years of historical warping.  Conveniently enough, this tale justifies the naming convention of the series entirely, which even negates any concerns I even had there.  Ultimately, it blends this meta-exploration with a storyline and setting that is now rife with personal conflict as well as intergalactic threats after this first issue, and the end result is a surprisingly (for myself at least) interesting and unique angle into the world of the DCU.

Hammering that unique view home, Howard Porter has done a magnificent job with the character redesigns for this futuristic team.  An homage to their originals, while differing in their own ways, the new designs also seem to highlight some of the personality quirks between these characters in the style they have chosen to adopt.  Admittedly, there are a few panels that do not look quite right in the facial structure, but that can easily be chalked up to Porter trying some new things to find the tone he wants to capture with this new series.

A Buy.  I know, I’m surprised too, but this title was nothing like what I was expecting.  A unique setting within the DCU and an intriguing look at what makes these members of the Justice League iconic, Justice League 3000 just may have a bright future ahead of it.