You know those classic Avengers issues where our heroes would sit around the dinner table over some Chinese Take-Out and discuss the mission of the team and what it really meant to be an Avenger? Well Mighty Avengers #4.INH is Al Ewing’s “mission-over-dinner” chapter, except, instead of chilling out around a table, Luke Cage and his crew of street-level Avengers spend this issue refurbishing and renovating the Gem Theater in Harlem as their new headquarters. Luke Cage’s team is here to work and help the people of New York, and Al Ewing’s choice to have them discuss their mission statement in the middle of renovations speaks to this “Heroes For Hire” mentality. 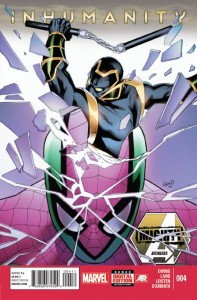 Of course, the Superior Spider-Man mentions the similarities between Cage’s old Heroes for Hire gig and this new team of Mighty Avengers. Cage replies that “The Mighty Avengers is a volunteer organization” and doesn’t take money for their superheroic good deeds. Semantics, sure, and it doesn’t entirely explain away just why Mighty Avengers isn’t just a new Heroes for Hire series, but damn if I don’t like seeing Luke Cage take on the leadership role that he grew into so well during Bendis’ long run on New Avengers. Most of the issue focuses on the burgeoning rivalry between Cage and Spider-Man as well as Falcon’s induction into the team. Falcon’s comments that his name isn’t “And The Falcon” reflects a desire to get out from under Captain America’s shadow as well as the book’s larger mission of establishing these street-level heroes—heroes of color, specifically—as Avengers. These characters are heroes, and, for whatever reason, they’ve been held back or pushed into certain roles. This team (and this book) gives them the chance to shine.

The rest of the book features the Inhumanity tie-in, which at the moment appears to be a relatively standard Evil-Corporation-Trying-To-Exploit-Burgeoning-Superheroes storyline. At this point, it feels entirely shoe-horned in; there is a tangential connection to the new Ronin (formerly Spider Hero) who may or may not have had his identity revealed this issue depending on how often you frequent the dirt sheets and/or the more mystical corners of the Marvel Universe.

And not for the “Boo” Marvel in the room (see what I did there… because Blue Marvel is a character in the book… get it?): Greg Land. On the upside, Land does a great Superior Spider-Man, Falcon, and Luke Cage. The linework is crisp, the storytelling decompressed, and the panel lay-outs cinematic and just innovative enough. On the downside, all the characters are smiling far too often, Jessica Jones looks bizarre, there’s a disconcerting and physically inaccurate @$$ shot of Monica Rambeau, and Maria Hill needs hair plugs. It’s just a mixed bag with Mr. Land’s artwork, especially when it comes to the presentation of the female form. Given the promise in Al Ewing’s character work and drama, it’s truly unfortunate that Land’s work can be so distractingly awful just often enough.

I’m still a fan of Mighty Avengers. I love the characters, I love the mission, and I love the banter. Unfortunately, like most who are critical of the series, I find the quality and consistency of the artwork so haphazard that it’s distracting. In a medium that’s so visual, it’s a real problem. I’m going to keep reading Mighty, and I really hope you do to, but I get the Land-disdain… Here’s hoping the artist changes over soon!