I have to say that I was digging on Shadowman before the creative team switch. It wasn’t necessarily my favorite of Valiant’s comics, but it was entertaining enough to maintain a spot on my pull list. Although slightly bummed, I was for the most part indifferent to the creative team change. Now that I have read the first issue from Milligan and de la Torre I have a new opinion of Shadowman. 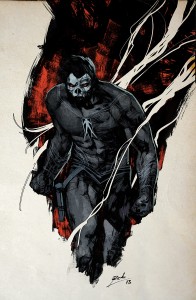 The art for one is a large contributor to my change in views of the series. It is something frigging gritty yet beautiful. De la Torre’s art without colors would serve this book well. We digital readers get treated to uncolored art in the back of each issue, but this time when I saw a few of the uncolored pages my jaw nearly hit the floor. I don’t want to discredit the great work that David Baron did with the colors in this issue, because they add a lot to the ambience and tone of the issue. However, if Shadowman  were released in monochrome, it would still look gorgeous. (Valiant, I know you read these sometimes. *Knudge*Knudge*Wink*Wink* Hardcover bonus material.)

The art is refined, but there is a real rawness that adds to the story that Milligan presents. Up until this point we’ve seen Jack Boniface pretty much forced into the role of Shadowman. We haven’t really gotten to know an incredible amount about him. Changing the focus away from the external forces to the internal struggle between Jack, the Shadowman loa inside of him, and in particular his past is something relatively new to this series. It’s something that needs to be explored to add some much needed depth to the character. While Justin Jordan and team gave us some fun action, and a pretty chilling villain in Darque, I struggled to find any kind of real strong understanding about the series’ hero.

Milligan has also presented a story that is completely accessible to new readers. The very short “Previously on” summary at the beginning gives you more than enough to jump right into the issue. As someone reading from the first issue, it was an incredibly refreshing and engaging read.

Shadowman has been a darker comic bordering on the horror/superhero genre since its start, but within the opening panels it is definitely crossing over more to the horror side. I’ve said it before, and I’ll say it again; the word “superhero” does not really fit into the world that Valiant is creating. It is evident right off the bat that Jack Boniface aka Shadowman is not a hero free of blood on his hands. He has a violent past, and it’s creeping out from somewhere in his subconscious. Combined with the powers of a voodoo warrior and a walker between the worlds of the living and the dead, and some serious poop is going to happen. Heads will most likely roll, both figuratively and literally. In fact, the struggles don’t stay internal for very long. I’ll leave it at that, as to not spoil anything.

An amazing debut from Milligan and de la Torre! Shadowman was already a fairly entertaining and enjoyable read, but this team looks to be turning it up to 11. The focus shifts away from the external and focuses on the lesser used “man against self” (or could this be nature?). BUY IT!