There’s a trend happening in the comic world right now (at least where the Big Two publishers are concerned) involving the renumbering of titles in order to grab new readers.  The logic is that this makes comics less intimidating for folks that are just getting into the medium.  Obviously this movement has resulted in a significant influx in readers, which is wonderful, but many now argue that we’re beginning to forget that you don’t necessarily have to jump on a book right at its debut in order to enjoy it.  Good writers can make their comic approachable to new eyes while also pushing their larger narrative forward all in a single issue.  You might not know everything there is to know about all the characters and their history, but you’ll gather enough to be able to grab on and enjoy the ride, and that’s exactly what you can do here in Green Arrow #26.  If you haven’t yet jumped into this book, this issue is a great place to start. 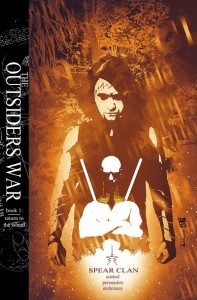 What has made Green Arrow so refreshing since the Dream Team of Jeff Lemire and Andrea Sorrentino took over has been the definitive direction they have given it: they have a plan for Ollie and know exactly how they want to achieve it.  Now we finally get to see what the accumulation of these efforts have led to as we begin “The Outsiders War.”  The story begins with Shado and Oliver, who has now fully recovered from his battle with Count Vertigo, embarking on a journey to find the fabled Totem Arrow of the Arrow Clan.  Unfortunately for the young Mr. Queen, this means having to travel back to the island that he was stranded on when he first took up his mission.

Jeff Lemire does a wonderful job of showing the feelings of dread and anxiety that Ollie experiences as he returns to the place that both took away and gave so much to him.  For those just joining the book, some nice flashbacks are provided as his memories of the place wash over him, showcasing his transition from pampered entitlement to self-reliance.  His unwavering, almost desperate determination is illustrated beautifully by Andrea Sorrentino’s double-page montage of Ollie mastering his bow.  It’s a simple moment, one that certainly has been seen before, but it still hits home. It’s a nice way of establishing the person he has become, the principles he has adopted, and the test he will face as The Outsiders close on in their target.

Buy It – If you’ve been on the fence at all, now is the perfect time to start reading Green Arrow.  Issue #26 offers some great insight into Oliver’s time spent on the island and his journey to becoming a hero, while also continuing the overarching plot of his upcoming clash with The Outsiders.