The ’90s were a very different time in comics. In his excellent book, Supergods, Grant Morrison called the early ’90s “The Dark Age.” This was in reference to the subject matter that so many of the comics of the time took on: prostitutes, serial killers, homeless vagabonds, and dark streets with even darker alleys were the bread and butter of the day. The Maxx was one such book, first published in 1993, and in my midteens I thought it was the height of grown-up story telling. Of course, reading it now I begin to understand that it was less adult and more trying to be adult. This was a time when everything wanted to be The Dark Knight Returns and more often ended up being just another story about the struggles of people who didn’t, and never would, exist. 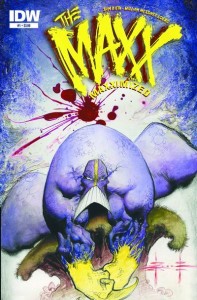 The Maxx, however, had something else–something special. Sam Keith’s art has always been a favorite of mine, and his sketchy, cartoony, exaggerated style played perfectly for the worlds he was creating. What The Maxx had, in spades, was fantasy. Not the heaven vs hell fantasy of Spawn or the big guns, big muscles fantasy of Youngblood, but urban fantasy mixed with the fantasy of the mind–where fields of open grassland and fantastical creatures stretched out all around. The Maxx, a homeless man in a purple superhero suit, lives in both of these worlds. Julie, a social worker who frequently takes him in for a meal and a bath, appeared in both also, though she doesn’t know it. But The Maxx also presents the question of which fantasy is reality when characters from inside of Maxx’s head begin to appear in the outside world. What follows is one of my favorite books from the ’90s, which I collected fanatically and still own. And, though it loses a little after two decades, it’s still a good, fun read.

The “Maxximized” moniker comes in with the art. Keith went back, with the help of IDW and Jim Sinclair, to his original art and rescanned every page at a higher resolution than was available back in those bygone days. He also had the whole thing recolored. The result is a crisper, sharper version of Sam Keith’s original vision. Unfortunately, I wasn’t able to get to my storage unit to get my old copy of Maxx #1 for comparison, but the quality and detail in these pages is evident and make Kieth’s art even more special than it was way back when.

Buy it. The Maxx was the best of what Image had to offer at the inception, and this “remastered” version is the same story with upgraded art. It’s definitely worth reading and worth enjoying. There is a great written piece in the back as well by Sam Kieth about the process of remastering the book that is worth a look. He also mentions an artist edition which should highlight the upgraded art even more, so keep a look out for that, too!