I spent a little time last week talking about my personal confusion over the concept of comic annuals. I might have been a little too harsh. Sometimes, I over think things like this when I really should just sit back and have fun. Instead of moaning about having to buy an extra issue of Deadpool this month, I should be happy that I get to read an extra issue of a title I enjoy. Right? 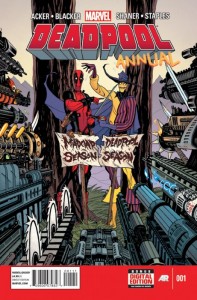 Deadpool Annual is actually a really fun read. Most of the issue is told in flashback, looking back to a time when a character named Madcap was fused with Deadpool and alive inside his head. Sound familiar? I can’t help but wonder if this might have implications for the regular Deadpool series in which the ‘Pool must extricate a SHIELD agent from his noggin. What is for sure, however, is that the issue is pretty damn funny. Deadpool is on assignment to kill a blind lawyer in Hell’s Kitchen (anyone we might know?) when he is confronted by Madcap, who looks more like a Looney Toon than a Marvel character. What Mapcap does have, however, is a Deadpool-like healing factor. Thus, when they are both reduced to the same pile of ash by Thor, they sort of grow together. What follows is a funny montage of how they get along together in the same head and then how they eventually come apart. If it sounds like a romantic comedy, it is, and Deadpool would be the first to tell you that. Cameos by Luke Cage, Daredevil, and Thor are just the icing on the whole crazy cake.

Evan Shaner’s art is well suited to this issue. His style here calls to mind Chris Samnee in its bold simplicity. He’s also clearly channeling Samnee in his depiction of Thor back from The Mighty Thor days. Colors are bold and the whole issue is just chock full of fun.

Buy it. This is a great one-off Deadpool story if that’s what you’re in the mood for, but if you’ve been following the series in Marvel Now, you’ll find much of the same humor in this annual. As I’ve said, it’s all sorts of fun and funny and well worth a read.