Avengers Arena is dead! Long live Avengers Arena! It all comes to an end with Avengers Arena #18, and a more satisfying ending I have not found in comics in a good long time. Characters die so that others can live, Murder World is abandoned, and secrets are forged as the series comes to a close, making room for a new series in 2014. 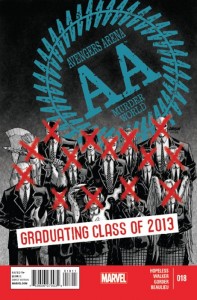 If it could not have been said before, it can definitely be said in issue #18: all hell breaks loose. The contestants have abandoned any camaraderie and alliances and are out for blood. Most of them, anyway. Some of our heroes are still thinking of the bigger picture, and if any of them can be said to have survived Murder World, it’s because of those heroes. The issue does feel a little short, though that might be because of several large splash panels throughout the book. Also, in the interest of putting a pin in the series, there are a couple of end sequences where we see things wrap up and look forward to the next series with these characters. Avengers Undercover is scheduled for March and stars the young heroes of Avengers Arena post-Murder World as they go undercover to take down the villains of the Marvel U. Most importantly, it stars creators Dennis Hopeless and Kev Walker continuing with these characters that they’ve made interesting and compelling.

I’ve spoken before about Kev Walker and his knack with these characters, and AA #18 only further solidifies his supremacy. It doesn’t matter if the moment is large or small, Walker’s art commands panel after panel. It’s been a pleasure watching this creative team create this world, and I’m more than excited to see that it will continue.

Buy it. I’ve said it before, and this will be the last time I get a chance, but this series had been awesome. Maybe the characters aren’t A-list, but the character development throughout the book has been top-notch. Along with the art, the dialog, and just about everything else. Stick around at the end for Dennis Hopeless’s heart-felt letter on the journey that was Avengers Arena.