Warning: There is a pretty large spoiler here that people who have not been reading Hawkeye regularly will want to avoid.

Things have been pretty gloomy in the world of Hawkeye since the murder of Clint’s friend, neighbor, and tenant, Grills.  Sure, there was the wonderful Pizza Dog issue thrown in there to help us weather the storm a little more easily, but the loss still hung pretty heavy in the air.  Enter issue #14 which (though it doesn’t feel as strong overall as most installments of the series) is incredibly fun, heartwarming, and downright bubbly. 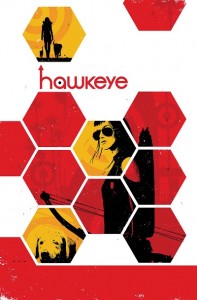 After deciding to step out on her own a few issues back, Kate Bishop is doing pretty well for herself.  Her and Lucky, aka Pizza Dog, have found a nice little beachside trailer and are enjoying the good life.  Unfortunately, that good life still requires a few dollar bills here and there to fuel it, so Kate decides to set herself up as a Hero for Hire and promptly finds her first case.

Kate seems to be sporting a new (or perhaps just revitalized) attitude thanks to her move from New York to Los Angeles.  In fact, she’s so quirky and upbeat in this issue that it almost plays like an episode of New Girl, but in a universe where Zooey Deschanel’s character is “pretty much an Avenger.”  This is sometimes a doubled-edged sword.  Just like the aforementioned television sitcom, the zany quirkiness of its lead can fall flat occasionally, but for the most part Kate’s banter hits its mark.

Further fleshing out this new setting for Kate is a fresh supporting cast.  Matt Fraction renders these characters meticulously, presenting clichéd players like “The Crotchety Old Detective” and “The Helpful Mysterious Stranger” with a knowing wink to his audience.  We’ve seen these characters types before, but that doesn’t mean we can’t have some fun with them.

Visually, the change in artists for Kate’s story really works in this book’s favor, setting it apart from Clint’s world and establishing her own.  Annie Wu (who made her Hawkeye debut back in issue #8) does a tremendous job highlighting the comedic elements in this installment.  Her facial features are spot on, complimenting the dialogue wonderfully, and her eye for communicating feelings through the characters’ body language is uncanny.  She is a fantastic choice for this story.

Buy It – Hawkeye #14 offers us a welcomed change of tone as we get to see what Kate and Pizza Dog have been up to in Los Angeles and her first case as a Hero for Hire.  Matt Fraction and Annie Wu’s styles gel together perfectly, resulting in a fresh and distinctive new world for Kate, one that readers will be eager to visit again soon.