This miniseries didn’t need any help from the hype machine.  In the midst of mourning the loss of Damian Wayne, a character many initially hated but had grown to love over the years thanks to his beautifully plotted progression from brat to hero, Batman fans were more than ready for another story featuring the precocious boy with the skills of a ninja and an old soul.  Unfortunately, if that’s the character you’re hoping to see in Damian: Son of Batman, you’re going to be disappointed.  This simply doesn’t feel like the young man that captured the hearts of readers and who fell so tragically. 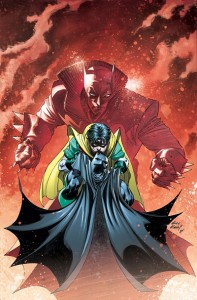 After tearing apart the Gotham underbelly in an attempt to find the one responsible for the death of the Batman, Damian finds himself under attack from the man who’s tactics and beliefs he’s thrown by the wayside in his quest for revenge: Bruce Wayne.

There have been too many moments in the course of this miniseries’ first two issues that have resulted in bewildered double-takes and confused head-shakes.  The timeframe that it takes place in is super inconsistent (the biggest example coming in the form of the age difference between Damian and Bruce), much of the history between the universe’s players has been thrown out the window, and some of the choices made by certain characters are simply baffling.  Seriously, why the hell is Commissioner Gordon a Catholic priest now?

The biggest causality in this miniseries, however, has been the loss of everything that made Damian great.  His heart, humility, and hard-learned respect for human life are all missing.  Instead we’re left with an older version of the boy we first met, one that is so incredibly unlikable that you lose whatever investment you might have had in him.  While writer and artist Andy Kubert’s visual work makes up slightly for this and the other problems that plague this story, it’s not enough to save it.

Pass – Abandon ship, people.  Already at its midway point, Damian: Son of Batman has proved to be a disappointment.  While it has had a few cool moments, the story has suffered from some illogical missteps and inexplicable story-turns, but its biggest failure is that it never really seems able to capture the voice and feel of the Damian we lost.