The concept behind Adam P. Knave and D.J. Kirkbride’s new mini-series, Never Ending, is quite simple: how does a superpowered, nigh-immortal hero cope with the seemingly perpetual cycle of violence and loss that comes with the cape? It’s deceptively simple, really, because it allows Knave and Kirkbride to explore our hero, Chuck Baxter’s shifting perspectives on love, good & evil, and heroism. Furthermore, the “NOTHING / EVER / CHANGES” through-line allows for some fantastic story compression and visual design that deconstructs comic tropes from the Golden Age all the way up to today.

In the 1950s, Chuck Baxter—lowly garage mechanic—gains his superpowers when a meteor strikes in his vicinity. In the world of Never Ending, superhero comics exist, but superheroes do not, so Chuck’s rise to defender and protector of America and the world is grounded in “our” real world; in other words, we skip over a lot of the melodrama and high fantasy that Golden Age books dealt with and instead see Cbuck dealing with celebrity, bureaucracy, and collateral damage. Due to the importance of time to the narrative, Knave and Kirkbride jump back and forth between the 1950s, 1960s, 1990s, and 2036. This necessitates a compressed brand of comics storytelling that has become a rarity in todays elongated, decompressed cinematic comic mainstream. 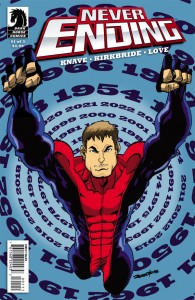 The compression helps Knave and Kirkbride toy with this idea of perpetuity and meaninglessness. Watching Chuck punch a robot three times over three separate decades on the very first page drives this point home. The single page devoted to a traumatic loss in Chuck’s life matches the single moment that this occupies in his long stretch of immortality. The meaning behind this loss, as well as behind his well-ahead-of-its-time interracial marriage in the 1960s is relegated to a passing page in a tome of a narrative. Knave and Kirkbride deftly use their compressed comic to explore and deconstruct our notions of mortality and superheroics.

In keeping with the all-inclusive style of the narrative. Robert Love and Heather Breckel manage to produce an aesthetic that blends of Golden Age Ditko/Kirby dynamism, ‘90s Jim Lee musculature, and Modern Age cinematics. It’s a visual treat watching Chuck trade in his Captain America-esque buccaneer boots for his oversized brown leather jacket / tights combo. It’s like reading Action Comics #1, except with much higher production value… But most importantly, Love and Breckel’s dynamic aesthetic matches the thematic intention of Knave and Kirkbride’s narrative; the synergy results in a clear moral-to-the-story as it were, and it makes for a much more enjoyable reading experience.

Check it out. Never Ending #1 is a stunning first issue to a comic mini-series not afraid to ask the big questions about this whole superhero thing. But instead of resorting to melodramatic plot threads about turning evil, alcoholism, or inadequacy (like the recent Sidekicks series), Never Ending presents a grounded, simple narrative about mortality and loss of purpose. Adam P. Knave and D.J. Kirkbride bring that same honesty and throwback comics storytelling that made Amelia Cole so enjoyable to this brand new series, and I can’t recommend it strongly enough!