When I first started this foray into comics two years ago, I walked in with a boatload of preconceptions.  “But Sean,” I hear you say, “Preconceptions are bad.  You shouldn’t judge a book by its cover.  Also, perhaps you should rethink your participation in Movember with that splotchy zombie facial hair pattern that naturally occurs on your face.”  All of which are statements to which I aquiesce.  Unfortunately, these things happen, and one of the chief amongst these initial thoughts as I made my purchases on day one, was the ‘hard fact’ that Aquaman is lame. 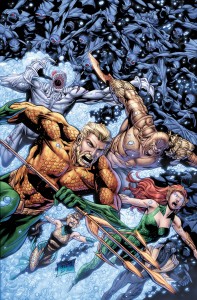 It’s not entirely his fault even.  After years of cultural conditioning that relegated the King of Atlantis to the role of an outclassed joke whose only contribution was speaking to fish, it was just a given in my mind that his solo title would be a floundering (*rimshot*) mess of testosterone in efforts to move him past that stigma.  Admittedly, it skirted a little close to that line in its freshman issues, but as Geoff Johns comes to the final issue in his run this week in Aquaman #25, it really highlights just how much legwork was done these last two years to create a new status quo for the character that is rich in storytelling opportunities.

In this final issue of Johns’ Aquaman run, Arthur, recently recovered from his first devastating loss to The Dead King, works alongside an unlikely ally in his efforts to find a way to save his beloved Mera as well as the world itself.  As one conflict is resolved, and sacrifices are made to forge a new destiny for the people of Atlantis, many more threats rise to take its place. For the Seven Seas hold many secrets, and that which Aquaman does not know, can most certainly come back around to harm him.

Geoff Johns is known for his constant work at re-building a mythos around a character that has started to lose its direction.  Now, looking back at the entirety of his run on Aquaman, it is fairly safe to say that he has not lost that touch.  Taking a title that needed to balance the gravitas necessary to bolster Aquaman’s image without burying it in obscene amounts of melodrama in order to do so, this issue acts as a capstone cursory glance at the myriad avenues that his plot-seeding has laid the groundwork for.  Political intrigue, theme-contextual antagonists who share a common and natural rivalry against Aquaman, and a complex history rife with stories to tell; all set upon a cinematic stage that showcases the raw action of these larger-than-life conflicts in all the splendor they demand.

Which leads me to the artwork of this issue by Paul Pelletier.  Anyone can go back and read my reviews from when Ries was leaving the title.  Trepidation of this Pelletier character trying to step in and keep pace with what came before him would be the best way to sum up those feelings.  These last few issues, with this chapter in particular, continue to push my nose into how wrong I could possibly be.  Regal in its presentation of these aquatic wars, Pelletier leaves his stamp upon Aquaman history by bringing to life scenes that would be the talk of the movie-going public should they ever find their way to the screen.  Extremely detailed, even in the unbridled chaos of combat this chapter shows, it cannot be overstated how much his work helped to amplify the tone of this series in its efforts to validate Aquaman as a legitimate hero to the masses.

Buy.  Even if you are less than jazzed at the prospect of reading an Aquaman title, this chapter shows a lot of the true potential of the character and his setting.  Additionally, this issue also acts as the set-up to a major Justice League storyline slated for next year; further demonstrating the faith that DC Comics has in Aquaman now that the ‘hard’ part is done.  Plus, like salt in the wound of my constant mis-judgements, Arthur puts my facial hair for a cause to shame; and how can you not support a king who strives to keep his subjects alive and healthy?