This issue of X-O Manowar ties in with the events of the inaugural issue of Unity. If you didn’t pick that up, first off, shame on you. Secondly, have no fear. Issue #19 of X-O Manowar stands on its own. While this issue is set immediately following Unity #1, it focuses a majority of the pages on Aric’s way of rule and his straining relationship with Volo. 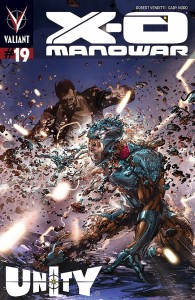 We have seen how ruthless and stubborn Aric can be at times, but Venditti takes some time off from super-powered alien weapons technology. He strips Aric and Volo down to their fundamentals to really solidify the direction of their relationship. Both men have ideas for what a leader needs to be for his people, and although they may have their differences, they can both learn from one another. The code of honor that Aric strictly holds to himself is brought to the forefront of the disagreement between him and Volo.

We’ve seen this code of honor from Aric before, but after devastating the Russian forces and then Harada’s forward attack team, we need to be reminded that Aric is not a monster. This was an opportune time for Venditti to show new readers and remind the older ones of this before we go too far down the path of war.

Cary Nord is back on art this issue, but I was a little sad to not see Moose Baumann on colors this month. The man has been a rather consistent presence in X-O Manowar and his colors were missed this issue. Nord provides all of the art from pencils to inks to colors on this issue. I’m a fan of his line work, but I wasn’t entirely digging the watercolors. In particular if seemed too light for the more serious air of the issue. Aric and Volo were stripped down to bare knuckle fist fighting, so I want something a little rawer. It’s not to say that the artwork was in anyways ugly, but personally, I didn’t feel it fit in with the rest of the issue. It’s nice that Valiant is letting their artist experiment a little, but since this issue is tying in with something that have been heavily marketing, this might not be the right time.

Issue #19 of X-O Manowar delivers a solid outing in character relationships and strengthening some of the ideals that they cling to. The art is well done, but without Baumann the colors don’t quite match the tone of this issue. It’s definitely worth a read however, so pick it up if you want to know more about the man inside the X-O armor.

Be sure to check out the Talking Comics X-O Manowar Contest that is going on right now. You have until December 8, 2013 12:00am EST to get enter. Hint: The answer to the question you need to answer is found in this review!