A Voice In The Dark is not your usual comic book fare. In fact, one of the first thoughts I had when opening the book is, “How did something like this end up at Top Cow?” That’s not to say that it’s bad–quite the opposite–but for a company that I associate with anime style visuals and elaborate, computer-generated colors and effects, the homemade quality of Voice seems very out of place. I learned from the blurb on the company’s website, however, that this book falls under their Minotaur Press imprint, which is all black an white. The cover features a comment from Terry Moore, which likens the book to Strangers in Paradise and I have to agree with that comparison, especially with the art. The story, however, is something closer to American Psycho mixed with Pump Up The Volume. 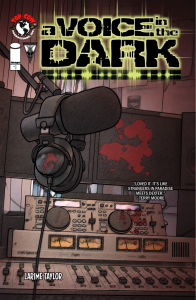 The story follows Zoey, a mixed race teenager who is off to college as a freshman. Page one, panel one begins with the caption, “Dear Diary…. It’s been 72 days since I killed someone.” From there, we follow Zoey and hear her internal thoughts as she tries to navigate normal life while also curbing her more murderous urges. She talks to the killer part of her in the mirror on more than one occasion, and she is prone to vivid daydreams of stabbing the people around her. Her only chance for reprieve is a late-night radio call-in show that she starts on the college radio station. There she hopes to be able to give her more predatory side a voice. It’s an interesting premise, and the end of the issue provides a welcome twist to lead into issue two. The comic also wears its influences on its sleeve and fans of Pump Up The Volume will recognize at least one direct reference. I can’t help but wonder, however, if the comic isn’t too different to be popular. It’s the kind of story that screams for a cult following, and the art is of a slice-of-life quality that will alienate many traditional comic readers.

Again, the parallels to Strangers In Paradise are evident mostly in the art. Turning back to the website, I found out that Larime Taylor is disabled, and the book is “written and drawn by mouth.” I’m not really sure exactly what that means, but I’m impressed all the same. As I said, the book is black and white, and the panels are almost minimalistic in their simplicity. It’s the kind of art one would expect to see in an internet comic or something that the guy at your local comic shop drew. This is, again, not to say that it’s bad in any way–just different. My only complaint is that there were moments where I wasn’t quite sure which character I was looking at, but I’m sure that a second read would clear this up.

Wait and see. A Voice In the Dark is not for everyone. Many will have trouble with the art. Others will have issues with the long spans of dialog with little or no action. Still others will have problems with the subject matter and/or the extreme diversity of the characters. This is not the kind of book that will ever sell 300,000 copies, but that’s okay. For those who are looking for something different, there is a good story here with many layers of character and plot to enjoy.