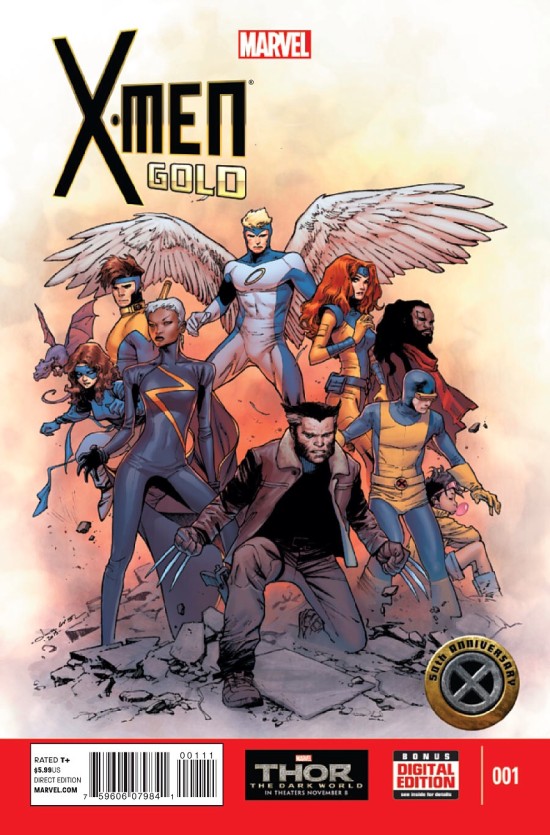 I really need to get more selective when it comes to anthology comics. At best, they can be a wonderful showcase for talent and a fun way to read quick and sometimes surprising stories. At worst, they end up a mismatched mess of unrelated stories and a poor reason to spend more money on an over-sized issue. Unfortunately, X-Men Gold falls into the later category. 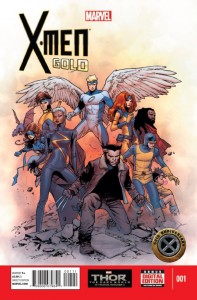 The first page of the book is a love letter from the current Senior Editor for the X-Men, Nick Lowe. He talks briefly about his love for the mutant super team and then outlines the stories in the book and the significance of the creators who have contributed to those stories. This is quite helpful as I had heard of most of the contributors but did not know their specific history with these characters. Unfortunately, the following pages don’t quite live up to the hype.

What I found most often is that these stories took place within the time-frame that the creators were working. For example, The first story, written by Chris Claremont and drawn by Bob McLeod, takes place during a time when there are a very large number of X-Men and they are in contact with both the Shi’ar and the Starjammers. Kitty Pryde is the center of the story, but her unfortunate aerobic-instructor-inspired get-up is hard to look at without laughing. There are characters here that I’ve never seen or heard of, and the story is overly complicated and a lot to take in. Also, the art is of an older style that I don’t feel like translates very well to modern coloring and printing methods.

The second story, The Sorrow Beneath the Sport, is actually the best of the bunch. Scripted by Stan Lee, the dialog is quirky and overly alliterative, but also a lot of fun. If the story was any longer, it might just get unbearable. The tale was plotted by Louise Simonson and features the original X-Men on their way to training in the Danger Room. Art by Walt Simonson is typically wonderful as he’s able to give the characters a classic look without having the pages look dated.

Next we have a story featuring Banshee and Sunfire arriving by plane in Memphis. It turns out both of these characters have shown up on a pilgrimage to the music that called Memphis home, but they have a small scuffle and yell at each other for a while before they become friends. Roy Thomas gives us a story here that is somehow supposed to slot into Giant -Sized X-Men #1 from 1975, and I personally felt like I missed the party. And the dialog is really not good, especially Banshee’s Irish brogue. The art by Pat Olliffe was not particularly compelling either as it often featured faces with no backgrounds in uncomfortable close up and too many expressions.

Next up is Options, written by Len Wein with art by Jorge Molina. Since Len is the creator of Wolverine, this is the Wolverine story of the book. In it, Wolverine contemplates how he would murder the rest of the X-Men if he had to. And, that’s pretty much it. The art is good looking, especially the colors, also by Molina. But, all in all, there’s really not much to it.

Then we have Dreams Brighten, written by Fabian Nicieza with art by Salvador Larroca. I honestly am not sure what is happening in this story. It seems to start in some kind of alternate reality and end in the middle of some story that I don’t recognize. Yet again, I feel like I missed the party, and the story does nothing to try to put me in the right time and place. The art is a cool, almost cartoon style, but it didn’t help me find my place in the story.

The last two stories are pieces from X-Men books on the shelves from the last couple of weeks. First, a chunk from Amazing X-Men #1, and then a scene from the middle of All-Men X-Men #18. Not bad scenes, and a great intro to what’s happening in the X-World right now. However, since I’ve already bought both of these issues, I was disappointed to find that the last third of the book was stuff I’d already read.

Skip it. X-Men Gold is for a select few fans–those who still reminisce about the old days and those completionists who need everything X-Men. For the rest of us, celebrate the 50th anniversary of the X-Men in your own way. Check out Amazon and one of those classic X-Men graphic novels you’ve always meant to read like Days of Future Past or House of M. Sign up for the Marvel Unlimited App and bone up on some classic issues from these same creators. Watch the old TV show, play an X-men video game. There are better ways to remember than X-Men Gold.