I would like to lead off with this: Boom Studios has been doing some really great creator-owned titles in the last few months. Six-Gun Gorilla, Suicide Risk, and Imagine Agents are just a small handful of the cool stuff they’ve got going on over there. It makes me very happy to see a comic company that’s mostly known for licensed products branch-out into original work. I’m happy to say that Protocol: Orphans is another step in the right direction. 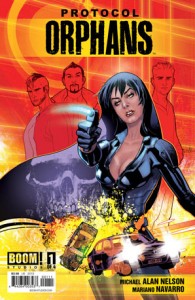 The story is something of a cross between The Umbrella Academy and a Jason Bourne movie. This issue doesn’t provide a ton of back story, so the history of the Orphans and exactly how they got here is still something of a mystery. However, what the issue does have, in spades, is action. The Orphans work in teams to try to locate and stop a bomb that threatens thousands of lives. As the plot unfolds, we get some short flashbacks into the childhoods of these people as they are forced to hack computer code before they die from poison gas or solve a puzzle before a puppy dies. It’s all quite twisted, and the Orphans all have a kind of arrested development as they call their leader Dad and argue amongst themselves. The story ends on a nice twist that will lead the rest of the series forward nicely.

Mariano Navarro’s art is perfect for this story as his faces are all very well defined and distinct. Since there are about seven characters to track in the issue–and that’s just the Orphans–it’s important that all of the characters are easy to pick out at a glance.

Buy it. Protocol: Orphans is only a four issue mini-series, but I think it’s going to be a great read all the way through. This is a solid spy/thriller with lots of action and a good dollop of mystery, and I’m excited to see where it goes.