It’s hard not to cheer for the underdogs; and nobody fits that moniker better than the low-rent carry-over villains of The Flash collectively known as The Rogues.  They’re not cool (insert Captain Cold joke here), they’re not powerful, and in comparison to their villainous compatriots, they hold on to an outdated sense of morality that is at best counterproductive to a group of career criminals.  But that, combined with their penchant for getting into situations well above their abilities, is exactly what makes them so entertaining to follow.  Like all titles tied to an event though, there are two audiences that must be written for, and that very scenario is what takes a bit of steam out of this second issue of Rogues Rebellion. 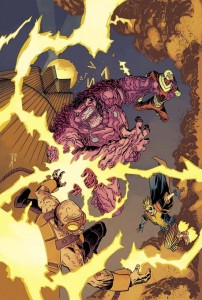 Picking up at the end of the first issue of the miniseries, The Rogues are confronted by Power Ring and Deathstorm, as the Crime Syndicate demands to know why these villains have not followed orders.  Conflict ensues as a result, and The Rogues now find themselves on the wrong side of all parties.  Villains to the heroes, and enemies to their ‘syndicated’ compatriots, they have become self-motivated pawns in a game that is well out of their league.  Can The Rogues recover from whatever Deathstorm has done to their powers to survive the assorted threats placed in front of them?  And will good or evil ultimately benefit from the ramifications of their desperate manuevers for survival?

As stated above, there are two different crowds that this miniseries is catering to; those who are reading the Forever Evil event, and those only reading this particular title.  Unfortunately, in the attempts to keep both parties up to speed on the overarching story, Buccellato uses a lot of real estate in this second issue to inform the second group of people what happened to these characters in Forever Evil #3.  While I enjoy zooming in on moments in an event like this on occassion, this particular instance did not add much more than what was covered in the event issue, and as such felt a little stale for the first half of the issue to folks like myself who have read the Forever Evil titles.

That being said, once free of those obligations and left to its own devices, this issue delivered exactly what I wanted from this mini when I heard it was announced.  Constantly escaping from one predicament only to find themselves even deeper into another, Buccellato does a splendid job in making these unlucky fools into likeable characters, all with their own reasons for going counter to what logic would dictate them to do.  It’s amusing, entertaining, and really plays up a lot of the pathos-filled aspects of these specific characters who appear as surface-level cheesy as Captain Cold and Mirror Master.

The artwork provided by Hepburn adds just enough levity to the madcap quips and bumbling reactions of our protagonists, grounding it enough to link up with the Forever Evil event without burying the fun into the despair of the event.  A bit more cartoonish than last months combined effort with Patrick Zircher, the playful style accentuates the humor of the title, and translates the physical aspects of their comedy nicely.  It is certainly a style I can appreciate more than the last issue’s split duties, and I think it highlights the proper tone as our protagonists take their tour through a world torn asunder.

Tentative buy.  Those who are not reading the main event title will have a great time and see no issues with this chapter at all, while those keeping up there will have to wade through a healthy portion of recap.  Once clear of that hurdle, the issue really does shine, but with half of the issue already taken up I am hard-pressed to give it a full Buy.  As a miniseries of its own merit though, most should find a lot of fun in the story being told!