“All Out War” rages on in The Walking Dead #116!!! Robert Kirkman and Charlie Adlard continue their post-apocalyptic zombie survival epic with their standard (and exceptional) blend of character-driven drama, high-octane action, and gruesome zombie-on-human and human-on-human violence. 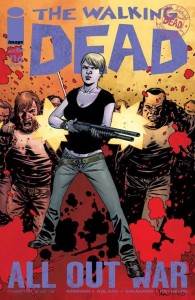 The Walking Dead #115 kicked off the “All Out War” storyline as Rick led the forces of Alexandria, the Hilltop, and the Kingdom converged on Negan’s stronghold. The issue ended on a cliffhanger betrayal, which should have put Rick’s side in jeopardy, but Kirkman deftly subverts our expectations in the very first sequence. What follows is exactly the sort of guns-blazing, zombies-ambling slobberknocker that fans have been waiting for since Negan burst on the scene nearly 20 issues ago. The pace is high and the characters on-point, though the ultimate resolution somewhat undercuts the “All Out War” suggested by the title. If anything, Kirkman intends on drawing out the conflict between the two factions. Long-time readers of The Walking Dead should be familiar with this decompressed mode of storytelling (remember the 20 issues we spend in Alexandria?), but I can see why some might be let down with the tease of action and resolution in this issue.

Charlie Adlard’s work on the series has been exceptional since the beginning. His staging of what is essentially a 20-page gunfight is clear and quick, and he establishes the desperation in Negan’s face in just one brief panel. Stefano Gaudiano’s neat, solid inking is a welcome addition to the series. Much of the clarity of the issue is due to the blend of Gaudiano’s solid linework and Cliff Rathburn’s nuanced gray tones. The Walking Dead has consistently been a visual treat, and Gaudiano and Rathburn’s presence for this story arc just amplifies that excellence.

Check it out! “All Out War” is the culmination of nearly two years worth of storylines, and each chapter teases the ultimate comeuppance for the dastardly Negan. Kirkman hasn’t pulled the trigger just yet, instead complicating and extending the battle between the two groups, so be sure to pick up the next issue in two short weeks to see what happens!!!