I’ve got a soft spot for alternative historical fiction. Abraham Lincoln: Vampire Hunter is my jam. So when I opened Chris Dingess and Matthew Robert’s Manifest Destiny #1 from Image and learned that it was essentially Lewis & Clark: Monster Hunters, I squealed like a little girl (metaphorically). 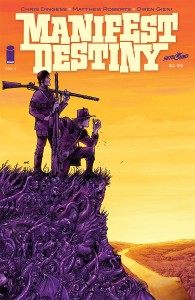 The premise is simple: Lewis & Clark, the legendary adventurers and explorers from your grammar school Social Studies textbook, were actually sent by President Jefferson to clear the Western frontier of mysterious creatures. Lewis is the scientist and chronicler; Clark is the soldier and muscle. The duo leads the expedition across the West, covering up their actual mission with a public façade of exploration and adventure. To further complicate matters, their crew of honorable soldiers is joined by volatile mercenaries, most of whom are prisoners seeking a presidential pardon. So, in addition to the mysterious monsters they’re supposed to be hunting, Lewis & Clark must deal with this internal threat.

The debut issue unravels this alternative history slowly over the course of the debut issue, with Dingess focusing on establishing the internal threat before the strange, monstrous components literally burst onto the scene. Dingess brings his extensive TV writing expertise (Being Human, Ed, Medium) to this new book from Image, quickly and efficiently blending the necessary exposition with compelling conflicts. Matthew Roberts brings a neat naturalism to Manifest Destiny that mixes the classic Image house-style with a certain historical realism.

Manifest Destiny is the newest high-concept series from Image. Chris Dingess and Matthew Roberts give us a fascinating alternative history that capitalizes on the “face the unknown” metaphor of Lewis & Clark’s expedition into the West. Check it out!