I’ve been watching Riley Rossmo promote this new series for awhile and now it’s finally here. I would read just about anything that his hands are in, he never fails to impress artistically. Drumhellar in particular looks like a return to the spooky, supernatural tone that Green Wake did oh, so well. 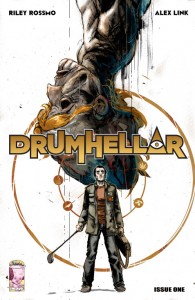 Drum Hellar is a paranormal detective who gets his clues thårough visions brought on by hallucinogenics or in this case, lightening. He sees a pretty, albeit strange, vision that somehow leads him to visit an ex girlfriend. Apparently they shared an ex, a bisexual werewolf. Drum pulls a bog man out of the swamp at night, brings it home and shares an intimate moment with it. He sees a few things (which I’m not yet sure the meaning of) and finds a productive way to burn off his trip. To say that there is some weird shit going on here is a huge understatement.

This is only a first issue, but it’s got lots of strengths going for it. First, there’s the art. Rossmo is a wizard with color, always using it to convey mood or atmosphere in a scene perfectly. Plus, his art is just so damn pretty, all swirly and textured. That’s about as technical of a description you’ll get from me tonight. The story is easy, but not overly simplistic. It’s concise but full of questions to be answered later. This issue is like the first 15 minutes of an X-Files episode, creepy things going on and every clue that’s revealed sets up a new, exciting mystery to follow.

Verdict: Drumhellar promises to be loads of wacky, cuckoo fun with characters from all planes of existence. Issue #1 is a bit of a rollercoaster of weirdness that I will definitely be riding to the end.