Poor execution is the killer of great potential.  A comic might have all the makings of a great story (engaging characters, an interesting plot, great art) but it can all fall apart if the writing doesn’t hit its stride.  Longshot Saves the Marvel Universe has a fun premise, but it struggles right from the start to achieve the potential it initially displays. 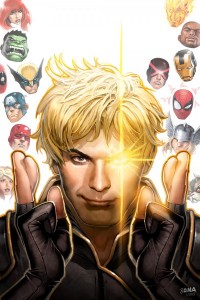 The first issue follows Longshot as he gets his hair cut, tries to buy a taco, and tells seemingly everyone he meets about how lucky he is, all the while being pursued by some sort of luck-divining masked man who’s wreaking havoc in NYC.  Meanwhile, Reed Richards and Tony Stark are busy trying to transport a Cosmic Cube that has mysteriously shown up in the city.

Show, don’t tell: it’s the cornerstone of good writing and it’s something that’s missing here in this first issue.  Don’t beat your audience over the head with a particular fact, theme, or idea that you’re trying to get across, just show them what you want them to know.  The most frustrating thing about this book, even more so than the constant stream of hit-or-miss (but mostly miss) comedy that we’re bombarded with, is the amount of times we’re told the same facts about Longshot over and over again.  We’re told before the story even starts what his background is and powers are, and that should be enough.  But instead it seems that every conversation the character has for the rest of the issue starts with “Hey, I’m Longshot, I have super luck powers, etc.!”

That’s not to say that there aren’t things that work in this book.  As insufferable as the humor can be at times, there are a few jokes that really hit their mark (“I’m a Scientist!”) and the light, fun tone of the book feels nice.  The art especially is a highlight, with those actually funny moments owing a great deal to it.  Unfortunately, it’s not enough to save this mini-series.

Pass – Longshot Saves the Marvel Universe has potential, but it’s overshadowed by the problems that plague it.  It still has three more issues to regain some footing, but if they’re anything like its debut you should stay far away.