Not to belabor the point too much, but Ten Grand is doing what so many other comic books, video games, and movies have tried to do, but it’s doing it ten times better. The story is something we’ve all seen before–mob hitman falls in love, tries to make good, dies, makes a deal with the devil. The concept is nothing new–heaven and hell are at war and humans are stuck in the middle. The thing is, Ten Grand does it so much better than you’ve ever seen it before that you kind of have to see it to believe it. 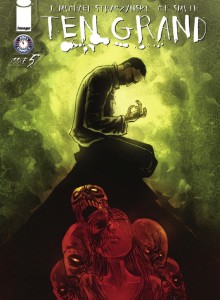 Issue #5 is a stand out for one special reason: Ben Templesmith did not provide the art. Now, I love Mr. Templesmith and his art, but this was the perfect issue to make the switch up, and it works very very well. In this issue, Joe ventures to Purgatory in order to find out what’s happened to his wife. Since we have stepped into a world that Joe himself tells us we cannot trust, this is where the art change serves the story. C.P. Smith’s style is visually fascinating–his people are stylized and expressive, his backgrounds a combination of rough brush strokes and blocky shapes, and his colors are moody with computer enhanced effects. All of it helps to sell the idea that we’re not in the real world anymore. The stand-out moment in the issue is a sequence where Joe must speak with the boatman on the River Styx in order to gain passage to Hell. The boatman is a bit of a thrill seeker, and the river changes based on how a person has lived his/her life, either calm and boring or rough and exciting. When Joe asks what it will cost for him to cross, the boatman simply says, “No charge…,” and, ”…Surf’s up.”

Buy it. Ten Grand is doing something that is not so much different as it is excellent. Story choices are smart as a whip and there has yet to be so much as a bad page in five issues. If you’re unsatisfied with the supernatural noir you’re getting elsewhere (we’re looking at you, Constantine), the you owe it to yourself to pick this up.