Let’s first address the elephant in the room (the one that I’ve been reluctant to speculate on until now): yes, I believe that Cataclysm will be the end of the Ultimate universe for Marvel. This is what I see: First, the title of this book, “Cataclysm: The Ultimates’ Last Stand,” seems pretty final. The title was new to me this week, and I was actually afraid that I had the wrong book. Second, I noticed that there are no solicits for any of the current Ultimate titles going forward. Spider-Man ended at #28, Ultimates at #30, and X-Men at #33. Each title will have a three part mini-series to coincide with with five-part Cataclysm book, and then there is nothing. At the same time, Marvel has now picked up on the fan fears of the end and the blurb for this week’s #1 carries a weighted “Is this the last stand of the Ultimate heroes?” But, all may not be lost. In my digging I also noticed that Cataclysm #5 has not yet been solicited either, so it’s possible that any continuation of the universe is just too far out to have solicits yet. 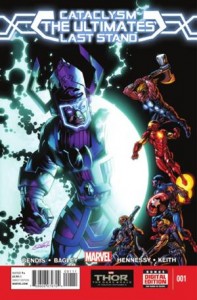 So, now that all of that is out of the way, let’s talk about the book! It begins with Miles Morales and his buddy Ganke walking in New York and talking about what Miles saw at the end of Age of Ultron: Galactus looming over New York City. Ganke isn’t so sure about whether he believes Miles until Galactus shows up and actually does some looming where everyone can see him. Miles reluctantly suits up to face this new threat, complaining the whole time that he has no idea what he’s going to do in the face of such an enormous threat. SHIELD shows up and unloads on the cosmic entity to no effect, and eventually the Ultimates join the party and take equally inefficient cracks at “the giant guy in the sky with the funny hat.” Nothing makes so much as a dent.

The story here is pretty thin, and the trademark Bendis dialog is wasted as pretty much every character who pops onto the scene has to exclaim, “What is that thing?!” There was also a moment where Ultimate Thing says, “Do you think we should try to communicate with it…?” and I just sort of threw up my hands in defeat. I’m not sure if Mr. Bendis is having event fatigue like I am, but this doesn’t seem like it’s up to his usual standard or quality.

Also, I wasn’t very impressed with the art. I’m having some trouble pinpointing where the real problem lies–whether it’s the inks, the pencils, the colors, or a combination of all three–but something here fell apart. Faces are inconsistent from panel to panel, some panels look unfinished, and the backgrounds are nothing but explosions and speed lines. Finally, the colors really aren’t what I would expect from a book of this stature. They are simple and overly bright in a way that betrays the tone of the book.

Skip it. I’ve been giving this Cataclysm idea the benefit of the doubt for months now and I’m just not impressed. I really needed this first issue to blow me away and it didn’t happen. If you are entrenched in any or all of the Ultimate Comics titles then you already know for yourself whether you are going to pick up this series. If you’re not, stay back. There isn’t really anything to see here. Just let the series play out and read about it in the USA Today.