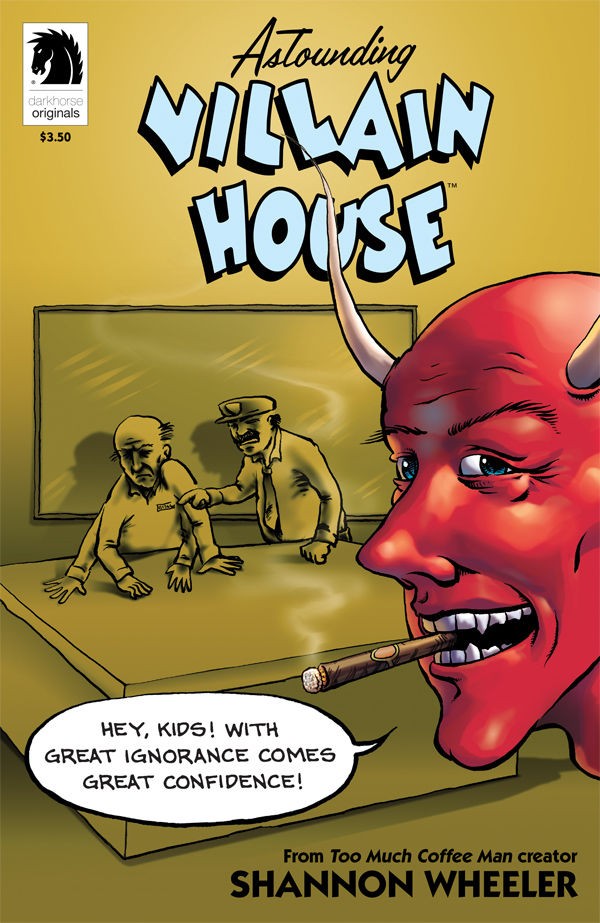 Astounding Villain House may be the perfect one-shot to cure “grim and gritty” reader fatigue. The introduction to the first story, “The Squid and The Pachyderm” (who knew squids and elephants were such good friends?), makes it clear that this book is devoted to goofy D-List villains. Better yet, it’s a blatant parody of well-known characters from Marvel. This is a silly diversion in an industry that often commits the sin of taking itself too seriously.

Shannon Wheeler packs four vignettes into this book and references various Marvel characters throughout (there’s even a Dr. Gloom). As far as individual stories go, “The Squid and The Pachyderm” and “Satan’s Son” are highlights. “The Squid and The Pachyderm” is about two washed-up villains serving time in a medium-security prison. They try to break out of prison to visit Pachyderm’s sick mother. In “Satan’s Son,” a man dates a woman who has super villains for exes. Cue Scott Pilgrim vs. the World? Not exactly, but it shares elements similar to a romantic comedy with complaints about their unfulfilled sex lives.

“House Arrest” borders on slapstick and features an obvious parody of Medusa from the Inhumans called Rapunzel. She literally shouts “Hair Net!” when she attacks someone. How awesome is that? The most direct reference to the Fantastic Four (and Mole Man, for that matter) comes from “Blind Mole-Rat King.” The Fantastic Family tries to take down the Mole-Rat King simply because they don’t like rats. The Invisible Wife is an obvious criticism of The Invisible Woman’s more passive power set compared to the men on her team.

“Besides, you’re just the Invisible Wife. You should be quiet.”

The artwork feels like a typical comic strip in the funnies section of a newspaper. Action and physical comedy are easy to follow throughout the book. Yet Wheeler lacks the sophisticated illustrations common to many current artists. This may be an intentional effect though, harkening back to simpler times when villains were supposed to be campy.

The Verdict: Buy It! It’s essentially a roast of some classic Marvel characters. No, this comic will probably not change your life or provide extensive meta-commentary that provokes deep reflection on the nature of the medium. But it might just make you laugh out loud at least once. Aren’t comics supposed to be fun still?