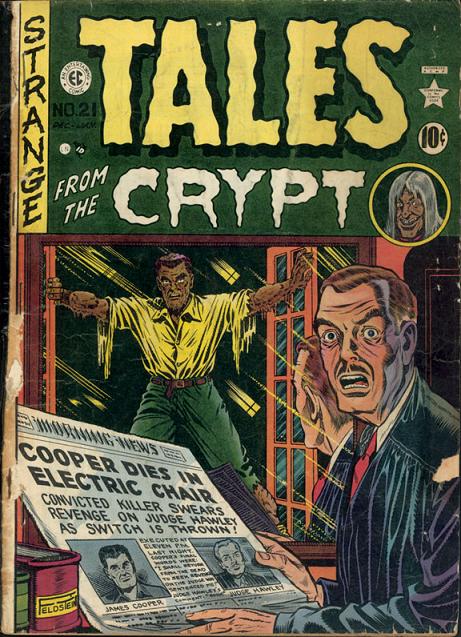 The Greatest Horror Stories Ever!

As the resident crypt-keeper here at Talking Comics, it is only fitting that I’ve been selected during this Halloween season to take you on a trip back in time to the 1950s, and a spot of grave-robbing at the tomb of the late, lamented Entertaining Comics Publications, who set a high-water mark for graphic horror that has never been equaled. William M. Gaines, with the invaluable aid of his chief writer/editor Al Feldstein, in an effort to jump-start the moribund company started by his father Max (one of the pioneers in comics, by the way), assembled perhaps the greatest team of artists to ever work at one time at any comics company, and who would illustrate the most creepily outrageous tales of terror and revenge here-to-fore seen.

Max Gaines’ Educational Comics Company was meant to be just that, boasting titles such as Animal Fables and Picture Stories From the Bible, and was his pride and joy after having sold off his All-American stable of books and characters (Wonder Woman, Green Lantern, Flash, Hawkman) to D.C./National in 1946.  After Max’s death in 1947, Bill Gaines decided to steer the company (with it’s new moniker) into what he called “The New Trend” with the launch of The Crypt of Terror (soon to be Tales From the Crypt) cover dated April/May 1950, although dry-runs of this approach had appeared in the title Crime Patrol, whose numbering Crypt would take up. That month would also see the re-naming of War Against Crime as The Vault of Horror with issue #12, with The Haunt of Fear (formerly Gunfighter) debuting the next month.

From the get-go, these three books, with their “modern gothic” tales of the horrific, featured a superb mixture of supernatural creatures and monsters of the more human variety in the form of murderous husbands and scheming wives, along with a large dose of gallows humour provided by the three hosts, the Crypt Keeper, the Vault Keeper, and the Old Witch, who would often provide a wry running commentary familiar to fans of programs such as “Zacherley”,“Elvira”, or “MST3K”. This mélange would strike a chord with readers, and within a year, E.C.’s money troubles would disappear, but other problems would soon arise in the looming presence of Dr. Fredric Wertham and the Congressional Hearings on Juvenile Delinquency.

Before diving back into that morass, I prefer to focus on the gloriously twisted books.  Writers Gaines, Feldstein, and Johnny Craig would weave new tapestries of terror from old movie plots, stories from Poe & Lovecraft, and well-known folklore, generally to the formula that Bill Gaines described as “You sharpen the pencils, the pencils sharpen your head”. In E.C. stories, the truly rotten people that inhabited them usually got their come-uppance in an ironic, O.Henry ending, now thought of to modern audiences as the Rod Serling/”Twilight Zone” trope. A few examples:

“Foul Play” (HOF #19 /a-Jack Davis) A ballplayer who kills his rival using poisoned spikes is dismembered, and his body parts are used as equipment for a demented game of baseball!

“Midnight Mess” (TFTC #35 /a-Joe Orlando) A man finds his missing sister living in a strange town where no one comes out until after dark… she takes him out for a “bite” !

“ ‘Til Death” (VOH #28/a-Johnny Craig) A rich man in Haiti loses his wife to disease, and wants her back in the worst way…and gets his wish!

The art in the various E.C. books was of the highest calibre, with editor (and occasional artist) Al Feldstein always selecting the right man for the tale’s milieu, whether Johnny Craig for “domestic”, Jack Davis for “over-the-top gruesome”, or the amazing “Ghastly” Graham Ingels for the most grotesque sequences imaginable, all told with his fine line work…and inevitable bit of spittle between the unclenching jaws of his protagonists. The rest of the roster reads as a “Dream Team” of comic’s greats: Wally Wood, Al Williamson, Reed Crandall, Jack Kamen, Harvey Kurtzman, Bill Elder, Basil Wolverton and Frank Frazetta.

This Halloween party would only last 5 years, as inferior books from copy-cat publishers would flood the market with titles that had none of E.C.’s story-telling expertise or redemptive qualities, and public pressure generated by Dr. Wertham’s book “Seduction of the Innocent” would bring about Congressional investigation linking comics to juvenile delinquency, and lead to Bill Gaines taking the stand, and this exchange with Senator Estes Kefauver:

Inv. Beaser: There would be no limit actually to what you’d put in your magazines?

Bill Gaines: Only within the limits of good taste.

Sen. Kefauver: Here is your May issue. This seems to be a man with a bloody ax holding a woman’s head up which has been severed from her body. Do you think that’s in good taste?

(At this, the crowd in the hearing room began to murmur)

Sen. K.: You have blood coming out of her mouth.

In the hue and cry following this disastrous appearance (Mr. Gaines claimed a drug interaction issue the cause),  in an attempt to stave off government censorship,  Mr. Gaines helped to found the Comics Magazine Association of America, a group of publishers who would establish a new code of standards for the industry, but whose first edicts were to ban the words “horror, terror and weird” from the titles of comic books, essentially putting E.C. out of business, although they would soldier on, sans Code approval, until late 1955 with the toned-down “New Direction” books, many stacks of which were returned to E.C. un-opened.

E.C.’s fan base, cultivated during their brief heyday, would have new chances to re-visit these wondrous books, as reprints began to pop up, first in the Mid-Sixties from Ballantine Books, but without doubt the beginning of the modern appreciation of E.C. was the publication of “The E.C. Horror Library” by Nostalgia Press in 1971, which reprinted two dozen tales from the various titles and achieved both critical and commercial success. This set the stage for two film adaptions by Amicus Productions (Tales From the Crypt [1972] and The Vault of Horror [1973]), as well as 1982’s Creepshow and the 1989 HBO Tales From the Crypt.

The entire run of E.C. comics has been reprinted in many formats over the years, from individual issues, through to the gorgeous Russ Cochran B&W over-sized hardcovers, but sadly, many of these are now collector’s items commanding a steep price. That said, there are new reprint editions making their way to the shelves (Tales from the Crypt Vol. 4 this week!) and  bargains to be found on the older ones, so as the Crypt Keeper might have said: “You should go out on a Halloween scavenger hunt, you never know what…or who you might dig up!”

ADDENDUM: The death of the E.C. line of horror comics due to the rise of the Comics Code would make William M. Gaines a multi-millionaire! He converted his comic book title Mad to a magazine so as to avoid Code scrutiny in 1955, there-by creating the most popular and influential satire magazine of all time, with a peak sales figure over two million in 1974!  (By some accounts, Mr. Gaines was pulling in a whopping $250 a week during E.C.’s glory days!)

The Ten-Cent Plague: The Great Comic Book Scare and How It Changed America  David Hajdu (Farrar, Strauss and Giroux/ 2008)

Soundtrack: This essay was written whilst listening to the score for The Haunted Palace, composed by Ronald Stein, as well as the RCA Victor release Classics From the Crypt, a compilation of horror-themed classical music, featuring “Danse Macabre”, “The Mephisto Waltz”, and “Symphonie Fantastique”.

Bonus:  Here’s the trailer for the 1972 Tales from the Crypt: