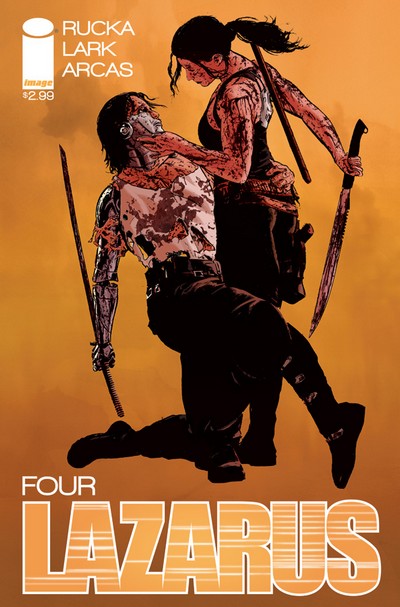 Forever and Joacquim have been attacked, brutally, at the Carlyle family border. While they fight to survive, Carlyle family scientists James and Bethany watch from the monitors as Forever’s life signs plummet. They can’t see who is attacking her, only that she’s in big trouble. Also watching from a different family center is her brother, Jonah, who wants to see that his plan to finish her is successful. When it becomes apparent that Forever is not letting herself be defeated just yet, Jonah sends his minion to alert his sister Johanna that they are in danger of being discovered & held responsible for the attack on their own family Lazarus. Johanna has a new plan, however. One that may keep her in the family’s good graces at the expense of Jonah.

Forever and Joacquim survive the attack, but now Forever must return home and work out why she was attacked by her own forces. Johanna’s web is spun with Jonah writhing at the center of it, and they all wait to see what their father decides to do next. Betrayal, violence, heartbreak and jealousy are at the heart of this powerful family.

Verdict: Read it. Lazarus is a strongly written, well formed story of a family that is it’s own worst enemy. The characters are fleshed out and complex, the art is perfect for the setting. It’s a well rounded series that hasn’t slowed down since issue 1.