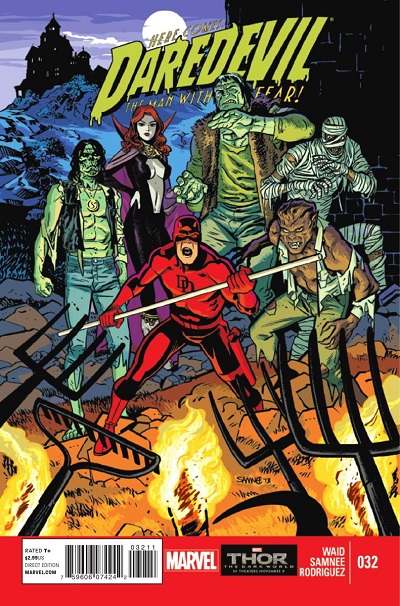 It was bound to happen eventually but knowing that doesn’t take much of the sting away, does it?  Yes, the news has broken that Mark Waid and Chris Samnee’s incredible Daredevil run will be coming to a close as of issue #36.  It’s sad news indeed, but let’s turn those frowns upside down folks!  We still have four more issues to drool/swoon over before the curtain falls.  So that being said, let me throw down a little comic book math to sum up the Man Without Fear’s latest adventure this month: Daredevil + The Legion of Monsters = Awesome.

In this issue we find Daredevil finally taking the offensive in his battle against the Sons of the Serpent.  After doing some research into the organization’s 200 year history, Mr. Murdock finds a connection between them and a mystical text called the “Darkhold.”  Upon attaining some info from Doctor Strange (in one of the best cameos in this Daredevil run) our hero is sent out to locate a man who can tell him more about this dark spell book.  Unfortunately, he gets a little sidetracked when he is sucked into a fight between some angry town folk and the Legion of Monsters.

As usual, Chris Samnee hits it out of the park, but what’s really an eyeball-grabber this issue is his work on the Legion of Monsters.  His style is perfect for them, giving the assorted creatures a nice pulp feel, while also making them look like they wouldn’t seem out of place in an episode of Scooby-Doo.  Daredevil #32’s cover highlights this, and is definitely a candidate for my favorite cover of the year.

Unless it’s written thoughtfully and well, I’m usually not that big on the “Fourth Wall” being broken all willy-nilly in books.  When done poorly, it’s a pretty big mood killer and seems to achieve the exact opposite of what it was setting out to do.  In the hands of a master, though, it can be quite entertaining as well as thought provoking, and that’s exactly what we get here in the opening pages of Daredevil #32.  It’s hard not to love the Jester ruminating on the importance and power of storytelling in our world, and the way Waid explains his Fourth Wall breach is brilliant.

Clever Fourth Wall breaks aside, the spooky bits found in this book are what made it for me.  The interactions between Doctor Strange (my all-time favorite Marvel character) and ol’ Horn Head are super fun to read, especially the explanation given as to why Matt doesn’t like being in the Sanctum Sanctorum.  The part involving the Legion of Monsters in the final third of the issue is well done too, making you wish the next book would hurry up and get here already.  Except not, because then we’ll be one step closer to the end of this run.  Ugh.

Grab It – Throw some spooky superhero fun into your life this week with Daredevil #32.  Featuring some great appearances from some of Marvel’s best supernatural characters, this issue will surely get you in the mood to Monster Mash all over the place.